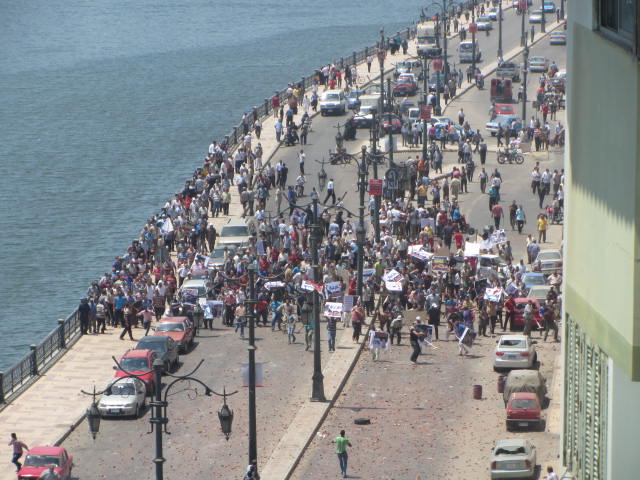 A march of an estimated 2,000 pro-Morsi supporters started at El-Elwi Bridge and headed to El-Basta Square near El-Maadani Bridge when it was stopped by Damietta residents, who blocked the street with tires, said Al-Dostour Party member Ahmed Abou Omar.

Women were involved in the march, said Abou Omar: “however, the residents stopped the march after the women had already passed.” He added that the pro-Morsi protesters were not from Damietta but appeared to be “from Mansoura or Gharbeya governorates” due to their accents.

Some marchers had reached El-Basta Square but were forced to exit when clashes erupted between them and shop owners in the El-Sharbatly and El-Togary neighbourhoods.

“Neither police nor the army were present,” said Abou Omar.

Abdel Razek, who was an eyewitness, said that the residents were able to stop the march after both sides had thrown rocks at each other.

Deputy Chairman of the Freedom and Justice Party Essam Al-Erian released a statement saying that the march in Damietta came in opposition to the Supreme Commander of the Armed Forces Abdul Fatah Al-Sisi’s “call for violence, terrorism and civil war,” announcing their rejection of “the coup” and their willingness to continue the democratic process under “the legitimate [former] president, Mohamed Morsi.”