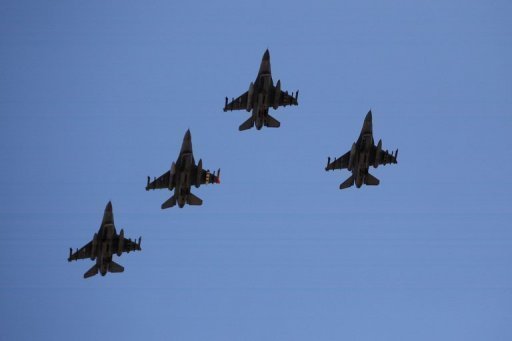 AFP – The United States has delayed plans to supply Egypt with an additional four  F-16 fighter jets due to unrest gripping the country, the Pentagon said Wednesday.

“Given the current situation in Egypt we do not believe it is appropriate to move forward at this time with the delivery of F-16s,” spokesman George Little told reporters.

“We remain committed to the US-Egypt defense relationship as it remains a foundation of our broader strategic partnership with Egypt and serves as a pillar of regional stability,” he said.

The army chief, who led a coup on July 3 that ousted president Mohamed Morsi, called for mass protests on Wednesday to back a crackdown on what he called “terrorism and violence” by Morsi supporters.

Sisi’s appeal also was discussed in Hagel’s phone call to the general, according to Little, who did not offer more details.

“I think it’s safe to say they discussed planned upcoming events,” he said.

Little did not specifically say why President Barack Obama made the decision to postpone the delivery of the fighter jets but said the US government believed it was “prudent” to take the step and that Washington wanted to see Egypt move quickly towards democratic rule.

“Moving forward, everything we do and say will continue to be focused on hastening Egypt’s return to a democratically elected government as soon as possible, consistent with our legal requirements and our national security interests,” he said.

State Department spokeswoman Jen Psaki said the decision on the F-16s had been “unanimously supported” by Obama’s national security team, but also refused to go into details.

The US decision, however, did not signal that the Obama administration had concluded that Morsi was pushed out in a coup, both officials said.

The administration has refrained from saying Morsi was the victim of a coup, which would legally require a freeze on some $1.5 billion in US military and economic assistance to Cairo.

US officials were still reviewing whether events in Egypt could be labeled a coup, Little said.

Under a $2.5 billion deal signed in 2010, the United States is committed to providing 20 F-16 fighters to Egypt. Four jets were delivered earlier this year and four more F-16s were due to be shipped at the end of this month, officials said.

Despite the decision to delay delivery, the United States would go ahead with a planned joint Bright Star military exercise with Egypt, Little said, adding “we’re not saying overall military assistance is suspended.”