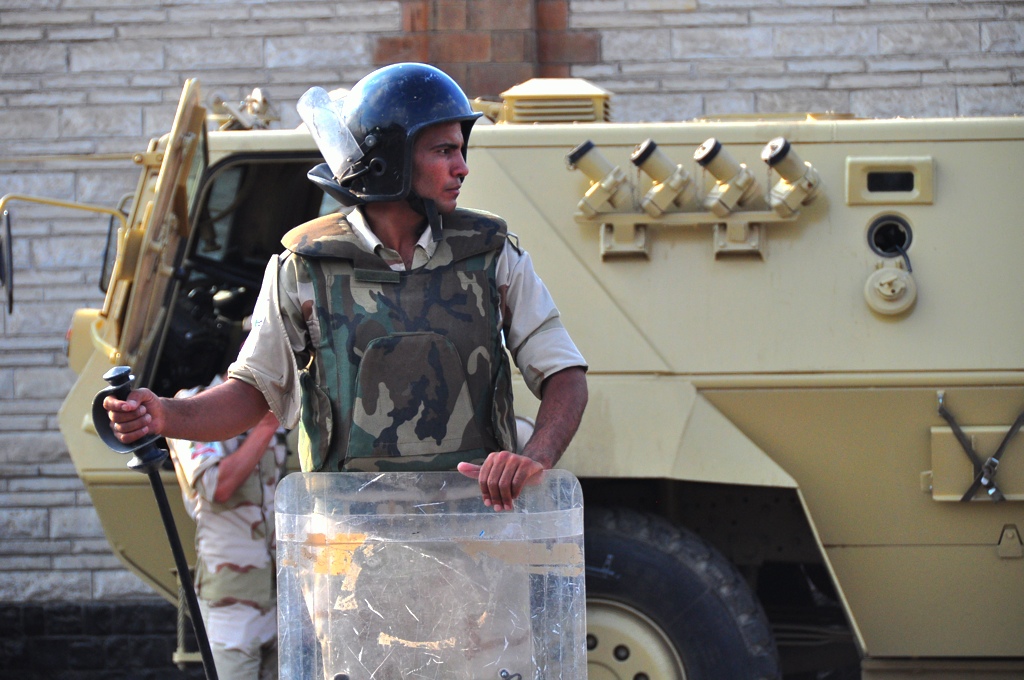 By Samer al-Atrush (AFP) – Egypt was on edge Thursday ahead of rival protests by the military and Islamists, as the government declared a “war on terrorism” to end violence convulsing the country since president Mohamed Morsi’s overthrow.

Police said they were planning massive reinforcements to secure Friday’s rallies, which raise the prospect of further bloodshed between Islamists demanding Morsi’s reinstatement and an array of opponents including the military.

The fugitive leader of Morsi’s Muslim Brotherhood Mohamed Badei urged Egyptians to peacefully make a “stand for freedom and legitimacy, and against the bloody coup,” in a statement on Thursday.

The United States said on Wednesday it was “very concerned” by military chief Abdel Fattah al-Sisi’s call for a rally to justify a crackdown on what he called “terrorism and violence.”

Washington, which has close ties with Egypt’s military, also announced it had decided to suspend a plan to supply its ally with F-16 warplanes.

The Brotherhood and allied Islamist groups had denounced Sisi’s call as “an announcement of civil war” and said they would press on with their own demonstrations on Friday.

Egyptian newspapers, mostly hostile to the Brotherhood, featured Sisi’s call, made in a Wednesday speech, in their front page headlines.

The state-owned Al-Akhbar ran a banner, partially in large red font, reading: “Sisi’s message has been delivered. And the people respond: We mandate you.”

In Qatar, a Muslim organisation headed by the influential Egyptian-born cleric Yusuf Al-Qaradawi issued an edict against obeying Sisi’s call, saying it could lead to “civil war”.

The general’s unusual demand — the military insists he is merely a defence minister and deputy premier in the army-installed cabinet — came after calls for a crackdown on Islamists staging sometimes bloody protests since the July 3 coup.

“Next Friday, all honourable Egyptians must take to the street to give me a mandate and command to end terrorism and violence,” the general said, wearing dark sunglasses as he addressed a military graduation ceremony near Alexandria.

Hours before Sisi’s speech, a crude time bomb placed outside a police station in the Nile Delta city of Mansura killed a police conscript, the interior ministry said.

In the restive Sinai peninsula, where militants have staged daily attacks on security forces, two soldiers were shot dead in separate ambushes on Wednesday.

More than 170 people have died in political unrest since the end of June, according to an AFP tally, many of them in clashes between Morsi’s supporters and opponents.

Huge crowds of Egyptians protested against Morsi on June 30, after just one turbulent year of his presidency.

Senior Brotherhood leader Essam al-Erian said Morsi loyalists would not be intimidated by the army chief’s call for mass rallies.

“Your threat will not prevent millions from continuously protesting,” Erian wrote on Facebook.

Tamarod, the movement that spearheaded the mass anti-Morsi rallies that led up to the coup, called on supporters to take to the streets again on Friday to support the army.

“We call on the great Egyptian people to rally on Friday across Egypt to demand… Morsi’s trial and to support the military in its upcoming war on terrorism.”

Morsi’s detention, and the subsequent arrests of senior Brotherhood leaders, have hardened his supporters’ stance.

His family said it would sue Sisi and also take legal action outside Egypt.

The United States has joined other Western nations in calling for Morsi’s release, although it has declined to characterise his overthrow as a coup, which would force a suspension of US aid.