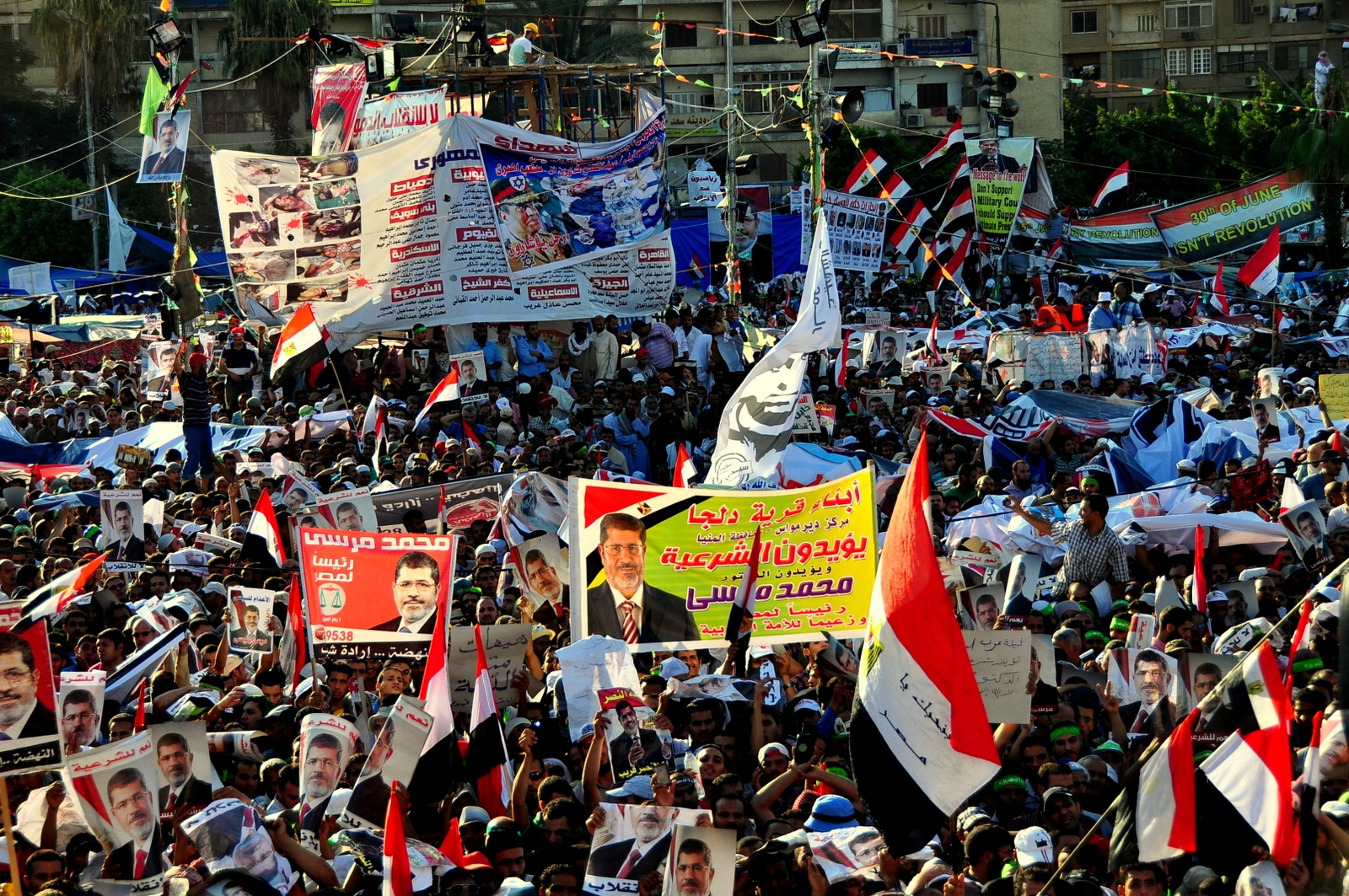 Tens of thousands of ousted president Mohamed Morsi’s supporters rallied in Rabaa Al-Adaweya on Friday to challenge what they claim is “a call for civil war” by Minister of Defence Abdul Fatah Al-Sisi.

The large protest in Nasr City gained momentum in the afternoon as pro-Morsi marches from nearby areas, including Heliopolis, Ramses and Shubra, flooded into the cordoned sit-in.

The defence minister’s televised statement calling for anti-terrorism rallies was the focus of protesters throughout the day, many making jokes at the insinuation that Morsi supporters are terrorists. “Welcome to all terrorists!” yelled one protester at the checkpoint of the sit-in. “Come on, terrorists, keep the line moving,” said another in a crowded passageway in the rally.

Protesters said they are not concerned over Al-Sisi’s call to put an end to “violence and terrorism,” which they perceive as an implicit reference to their rallies and sit-ins. Their response to the current deadlock is defiance of Al-Sisi and insistence on their demands, claiming they are willing to sacrifice their lives if necessary.

“They are two options on the table either Al-Sisi leaves and Egypt returns to legitimacy or we continue to paralyse the country through civil disobedience, demonstrations and other forms of escalation,” Magdy Abdelmaboud, a protester, said.

Helicopters continually hovered over the sit-in to the cries of protesters chanting against Al-Sisi. It was only when one helicopter dropped flags on the demonstrators that the crowd clapped and cheered for the army. Protesters said they continue to respect and admire the army despite their opposition to Al-Sisi.

As they grew excited over the army dropping flags onto their protest, a show of good faith first seen at anti-Morsi rallies, Sayed Saber, a protester, commented that this conveys how their relationship with the army is strong.

“Even after all of this political disagreement, the second the army shows any sign of compassion toward us, we go wild with cheers,” Saber said. “Our brothers, cousins, uncles and friends are who make up this army, they would never attack their own people.”

Many claimed that the Ministry of Interior, the judiciary and the media have sided with Al-Sisi in what they claim is an attack on Islamists. They reiterated that they remain defiant in the face of any arrests or crackdowns that may ensue in the future.

“The enemies of Morsi must understand that the majority of protesters in Rabaa al-Adaweya are looking forward to martyrdom,” Hisham Kassem, a protester, said. “For us, it is a matter of freedom or death.”