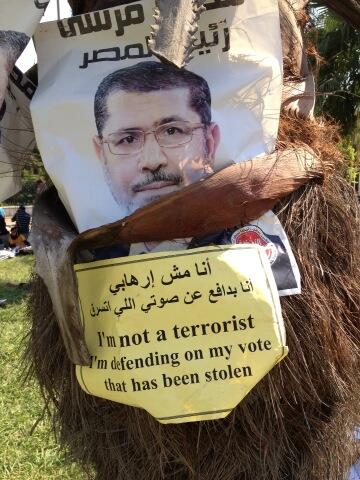 About one thousand people marched from Amr Ibn Al-A’as Mosque in Old Cairo to Al-Nahda Square on Friday in support of former president Mohamed Morsi.

The march took off after Friday prayer and called for General Commander of the Armed Forces Abdul Fatah Al-Sisi to step down, and for Morsi to be reinstated as president.

Many of the chants were against the army, directed at Al-Sisi, while others called for an Islamic state. The most common poster held was that of Morsi, while others included pictures of recently killed Morsi supporters.

At one point during the march, a police pickup truck carrying about six men armed with assault rifles parked near the march, but almost immediately left after a group of protesters ran towards it. They were stopped by fellow protesters however, during which people chanted “peaceful” and “the interior ministry are thugs.”

Others chanted: “To whoever is standing at the window, we are your brothers, not terrorists.”

Each time an army helicopter flew by, which seem to be monitoring the marches, the protesters would begin chanting: “Leave!”

Overall the atmosphere was energetic and jovial, with people smiling and spraying water at each other to help endure the heat.

As the march reached Al-Nahda Square, identification cards of those entering were checked and bags were searched. The entrance to the sit-in is barricaded by sandbags.

Inside, thousands lay in shaded areas and tents. Fertilizer equipment is used to spray water onto the faces and heads of fellow protesters. Many posters of those who were killed by the army during the Republican Guard clashes were hung, and chants coming from the speakers were mostly against Al-Sisi.