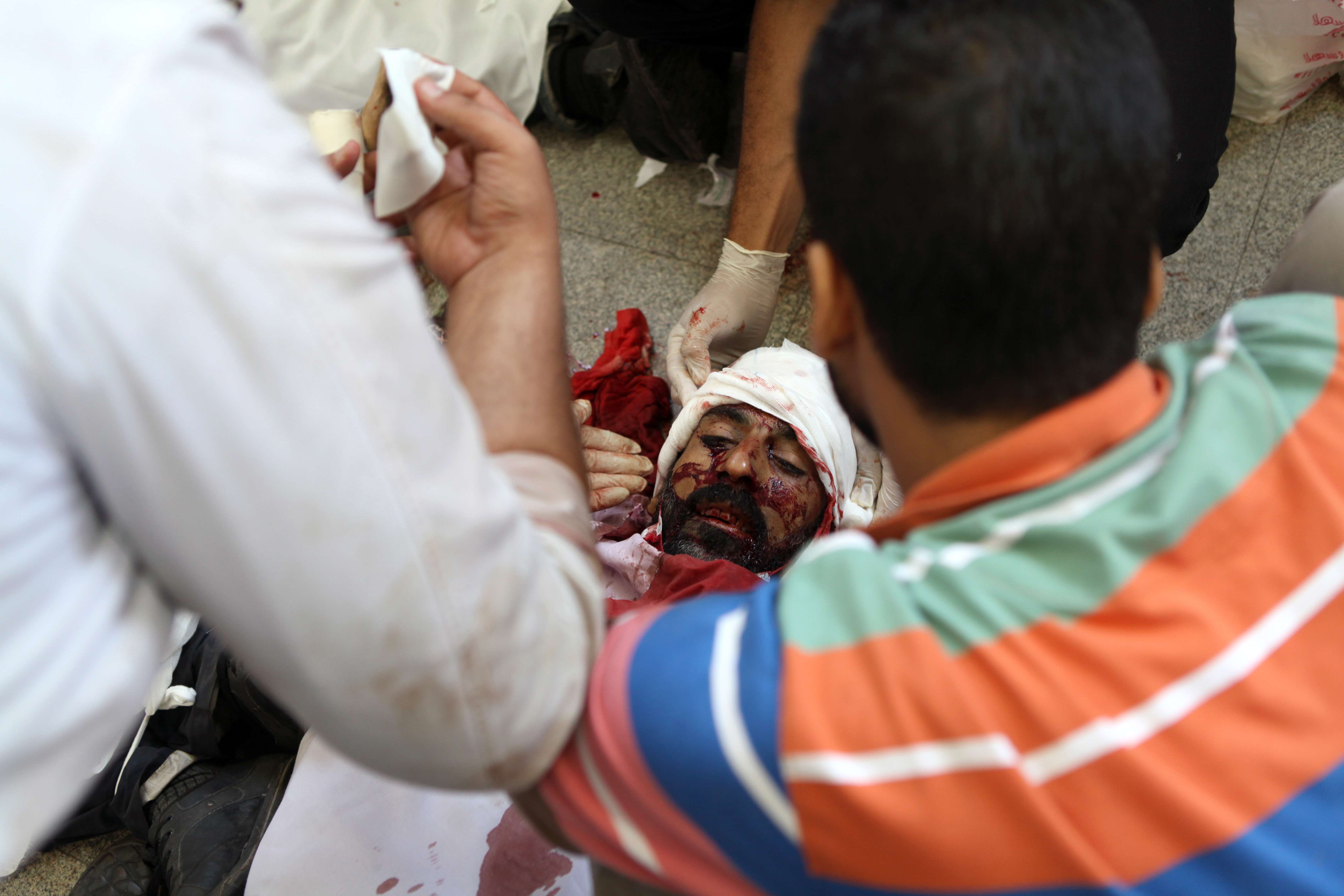 Grand Imam of Al-Azhar Ahmed Al-Tayeb decried the high number of deaths and called on the interim government to conduct an urgent investigation, AFP reported. Al-Tayeb also called for the immediate punishment of those responsible, in his Saturday statement.

Head of the Coptic Orthodox Church Pope Tawadros II lamented the violence on Twitter. “The life of every Egyptian is precious; bloodshed by their own unacceptable,” he said in a tweet. “We pray for the dead and wounded Lord have mercy on your people.”

The National Salvation Front, which includes the Free Egyptians Party, Al-Tayar Al-Sha’aby and the Socialist Popular Alliance Party and Al-Dostour Party among others, said in a statement on Saturday that the top priority of all state institutions and political parties should be to protect the lives of citizens and respect human rights.

“At the same time, the National Salvation Front cannot help but strongly blame and condemn the Muslim Brotherhood, which has been rallying its supporters in the vicinity if Rabaa Al-Adaweya Mosque for a whole month alleging that confronting security and armed forces… and threatening the lives of Egyptian citizens is a form of Jihad.”

The front, which was the biggest opposition bloc to former president Mohamed Morsi, has alleged that the Brotherhood’s exaggeration of the casualty count is proof of the organisation’s “inciting and aggressive approach”.

The clashes have left at least 72 dead, according to official figures, a number contested by the Muslim Brotherhood, which says that over 100 were killed.

The National Salvation Front said the Brotherhood is inflating the numbers “in a clear attempt to enflame confrontations.”

The front demanded the formation of an independent committee to immediately investigate and said the committee should keep in mind the official account that the interior minister gave on Saturday as well as eyewitness accounts.

In a statement on Sunday, Al-Tayar Al-Sha’aby described the events that took place in Rabaa Al-Adaweya as painful and said: “We do not distinguish between Egyptian blood, but we also do not allow ourselves or others to exploit their deaths… especially since these events come after a great day for the Egyptian people like Friday.”

Protesters from opposite ends of the political spectrum had protested on Friday. Al-Tayar Al-Sha’aby protesters were marching under the slogan of “no to terrorism,” which came shortly after Defence Minister Abdel-Fatah Al-Sisi called on Egyptians to protests to give him “a mandate and an order to confront potential violence and terrorism.”

Al-Tayar Al-Sha’aby said the use of the Saturday clashes for “political and media purposes after a day like Friday seems to be deliberate.”

The political group said state institutions are responsible for protecting the lives of Egyptians and that the message from their protests on Friday was to “avoid bloodshed.”

“A huge part of the state’s responsibility at this phase is to be transparent and publicise facts,” Al-Tayar Al-Sha’aby said.

The group added that security confrontations are the state’s responsibility but the confrontations must be within the law and must be executed professionally by security forces, not randomly.

Al-Tayar Al-Sha’aby added that security should show more restraint and “not cause that many deaths.”

The Ahmed Maher-led 6 April Youth Movement said Sunday it “condemns the violence and terrorism by everyone,” by those in power before dissenters, which the state must guarantee protection for, not oppress and kill.

“The Ministry of Interior, the army which is deployed across governorates, interim president Adly Mansour, and Muslim Brotherhood leaders are responsible for every drop of blood that was shed and the blood that will flow,” the movement said.

It called on Mansour to dismiss Minister of Interior Mohamed Ibrahim, issue directives to arrest Brotherhood leaders responsible for inciting violence, and to form a fact-finding committee to investigate the reason behind the excessive use of force when dispersing the protest.  The group also called on all parties to stop the use of violence and to “stop providing a political cover for it.”

The Arab Organization for Human Rights said it condemns the “use of violence and weapons, regardless of the reasons and motives.” The human rights organisation stressed the need for an independent judicial investigation, one that is transparent, public and guarantees accountability, regardless of the affiliations of the perpetrators.

Several political parties have also articulated their condemnations of the deadly clashes.

Al-Dostour Party offered its condolences to the Egyptian people for the “victims of the escalating armed violence,” in a statement on Saturday. The party said the violence was the result of the “state of extreme polarisation and [repeated] calls for incitement.”

Al-Dostour said while it condemns all acts of armed violence, it called on all state institutions and their leadership to live up to their “historic responsibility” during this phase, to exercise self restraint and to work unabated on preserving the entity of the state.

Al-Wasat Party condemned the violence as well and said it holds Al-Sisi, which the party described as the “leader of the coup,” the interior minister, as well as all figures of the interim authority responsible for the blood. Al-Wasat demanded in its statement on Saturday that those involved, whether criminally or politically, be tried.

The bloodshed, the party said, whether in Rabaa Al-Adaweya or other parts of the country, “will feed the revolution for freedom and dignity.”