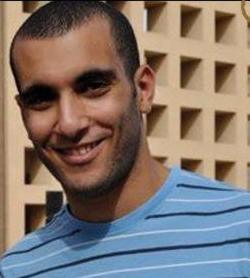 On 28 January 2011 Mohamed Faramawy was present in Tahrir Square. Despite being a member of the Muslim Brotherhood, his decision to join was motivated by a duty to topple a corrupt regime and not by the orders of the outdated and opportunistic guidance office. Faramawy, 31, did not throw a single rock during the severe clashes with the brutal central security forces (CSF). This was not out of fear or weakness, but rather out of deep conviction that the values being chanted were more powerful than all the sticks, gas canisters and bullets combined.

At one point, a high ranking officer declared the fighting was over. 15 soldiers were trapped inside a building, he said, afraid to come out as they were out of ammo, and asked for their help to get them out safely. At first, the officer’s proposal was fiercely opposed by some protesters; however, Faramawy succeeded in convincing the angry mob that there was nothing revolutionary in attacking 15 unarmed soldiers. They formed a human chain to secure the soldiers’ passage back to their colleagues, only to have the protesters shot with live ammo by the same soldiers shortly afterwards. Faramawy collapsed on the ground, suffering a devastating leg injury that required nine operations over the course of six months to repair, during which he was not able to move from bed.

Faramawy, who had devoted his life to education since graduating from Al-Azhar University, was not restrained by his injury. He founded the Nawaya Academy for young children, which according to its official page aims to raise an ethical and innovative generation who overcome differences among Egyptians and value the country over the individual. Faramawy was never a member of the Freedom and Justice Party, the political arm of the Brotherhood. He was responsible for developing extracurricular activities and arranging both educational and recreational trips for the children who constituted the cubs unit of the Brotherhood. While he didn’t believe politics could change lives for the better and instead focused on education, it was not long before politics has once again impacted his life.

On 18 July, protesters at Rabaa Al-Adaweya claimed to have discovered a thief and started beating him viciously. Faramawy, whose nature as a good Samaritan had been unchanged by the aforementioned incident, stepped in to protect the accused man and volunteered to take him to the nearest hospital. On the way to the hospital, however, they were stopped at a checkpoint and the man they were trying to rescue informed the officers that Faramawy and his friends had come from Rabaa and were responsible for his injuries. Once the officers heard the word Rabaa, they were detained and thoroughly searched. They found a picture of Faramawy shaking hands with Ismail Hania, concluding that he was a member of the Hamas militia (although it was from a humanitarian mission to Gaza). He was transferred with his friends to the highly guarded Scorpion prison and was deprived of his normal legal rights.

This incident is largely indicative of the enormous confusion and turmoil in Egypt these days. The Ministry of Interior was perceived after 30 June as the guardian of the uprising simply by not clashing with protesters, which has served to patch up its endless human rights abuses under the Mubarak regime. However, to truly fulfil their mandate, the police should guard all citizens, regardless of their political affiliation and protect all public buildings and private property, regardless of who their owners are. However, instead of preventing bloodshed, the police have refrained from intervening. This has discouraged members of the Brotherhood from resorting to any national dialogue, as incidents like the unjust and vengeful detainment of Faramawy and others like him remind them of the dark era of state security’s night visits, making them certain that the only alternative to Rabaa would either be the grave or prison.

No problem can be solved by ignoring it. The government should prove to Brotherhood members (those who didn’t incite violence) that they will not be excluded or isolated from the public sphere upon their departure from Rabaa. Formal channels of communication should be established and a solution should be reached as soon as possible to avoid further escalation. As the saying goes, a noise ignored will only keep increasing. The MOI should be reminded that it belongs to all Egyptians, while the army should refrain from its publicly supported excessive brutality that has resulted in the death of 51 protesters, leaving more mourning families than Mohamed Mahmoud. People might not sympathise with the Brotherhood, yet everyone sympathises with blood. Enough blood already. The guidance office should immediately resign. The lust of the old for their leather seats has only brought the youth closer to their coffins.