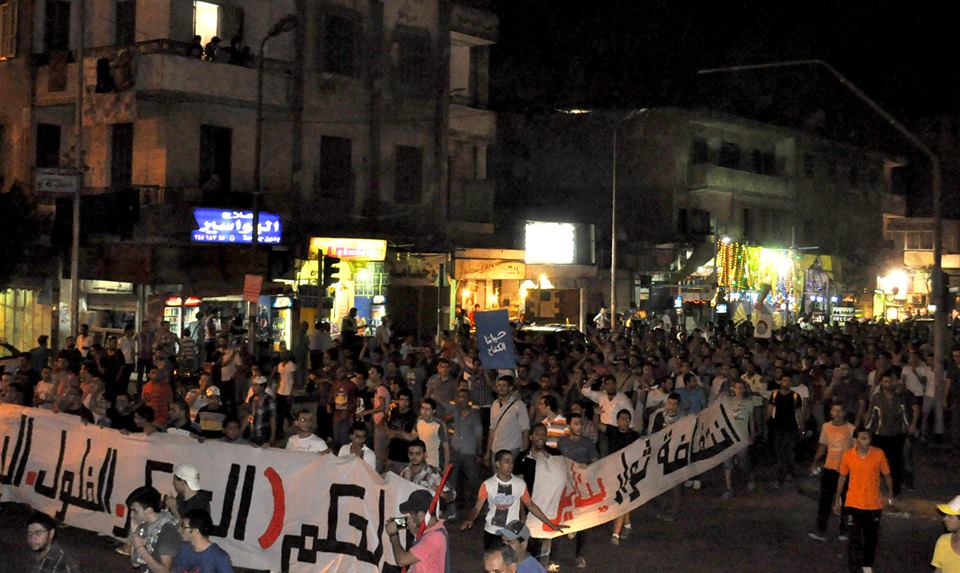 A few hundred people marched against the Muslim Brotherhood, military rule and remnants of Mubarak’s regime on Sunday.

The rally was organised by a movement called Ahrar, which rejects the Brotherhood, military and former president Hosni Mubarak’s regime remnants ruling the country. The protesters chanted: “Both aren’t to be trusted, the army and the Muslim Brotherhood, those who betrayed us in the square [Tahrir].”

One of the main chants was: “[I’m] Not [from the] Brotherhood and I don’t want [former president Mohamed] Morsi, but forget the throne [defence minister Abdul Fatah]Al-Sisi.” Another popular chant was: “The Brotherhood says legitimacy and the army says terrorism, but the revolution is the youth’s.”

The protesters denounced the violence in the country, chanting that all blood will remain costly, and saying: “You who killed those in Rabaa, the smell of blood radiates from you.”

The protesters chanted against people trying to “erase the revolution” saying: “over our dead bodies.” Another loud chant was: “Bread, freedom, social equality.”

The protest demanded retribution for those killed in protests since 25 January, chanting not to forget the Mohamed Mahmoud clashes in 2011 and 2012, Maspero clashes in October 2011 (State Television and Radio Building), Cabinet clashes in 2011, and Abbaseya clashes in 2012.

The protesters sang about those killed by police brutality, mentioning Khaled Said and Sayed Belal, who were both killed before the January 25th revolution. Ahrar vowed to “start a new revolution to get the rights of everyone who was killed.”

Other songs were about how both the Brotherhood and the army betrayed the revolution and killed revolutionaries, and how their loyalty was only to the US.

There were similarities to protests by Ultras, including the shaking hands gesture facing towards the leader of the chants, and red flares; even though Ahrar’s songs had new lyrics, but resembled the style of Ultras songs. The protesters jumped up and down, with their hands on each other’s shoulders while singing, “[Army/Police] Send your dogs, fight the revolutionaries, but forget about stopping the Ahrar [the free].”

The march began in Matareya Square and ended in Gamaa Square where one of the organisers spoke into a microphone and said that there will be escalation that will lead to a sit-in, and that protests must continue until the demands of the January 25th revolution are fulfilled.

Most of the protesters were males, ranging from teenagers to men in their late twenties. A human chain was created around the group of participating women to prevent harassment.

Correction: An earlier version of this article incorrectly identified Ahrar as also being called the Third Square.