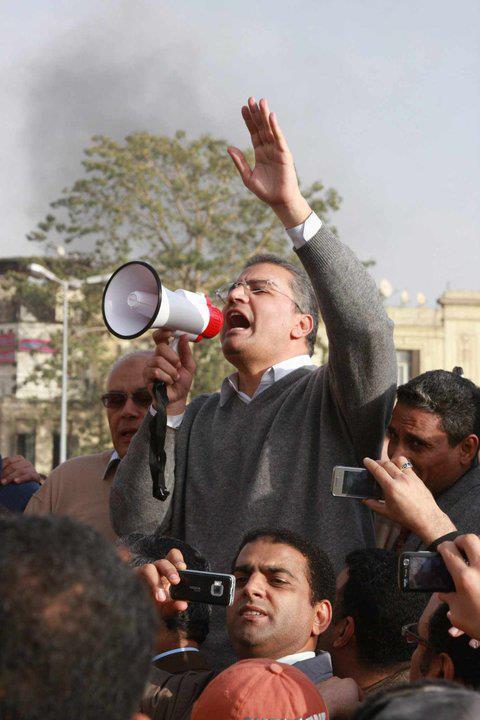 State-run Al-Ahram reported the two were arrested in Moqattam and then moved to Tora prison under tight security, after which they were investigated on charges of incitement of violence.

Al-Wasat Party said in a statement on Monday it condemns the arrests as well as the “manner in which it they were carried out, which brings us back to an era we thought was gone.”

The party added that “random arrests” are not based on any legal justification and are being covered up by accusations that are “outside the scope of reason and logic.
Al-Wasat called for a halt to these “abhorrent procedures” and called for the immediate release of all honourable people in the country.

The party warned that procedures like this only complicate the political impasse in the country because “they simply clog the political horizon” and present obstacles to any effort to get out of the crisis.

Al-Ahram cited a security source saying the arrests were an implementation of the prosecutor general’s orders.

State-run MENA reported that police received a tip on the suspects’ whereabouts and formed an extensive search team to confirm the information, after which they raided the building.

Minister of Interior Mohamed Ibrahim gave orders to follow all legal procedures with Sultan and Mady.

Sultan was interrogated in May after being summoned by Judge Tharwat Hamad after making statements suggesting that a number of judges illegally accepted bribes and gifts.

Earlier this month, Hamad issued an arrest warrant against Sultan after more judges filed complaints against him for insulting the judiciary.