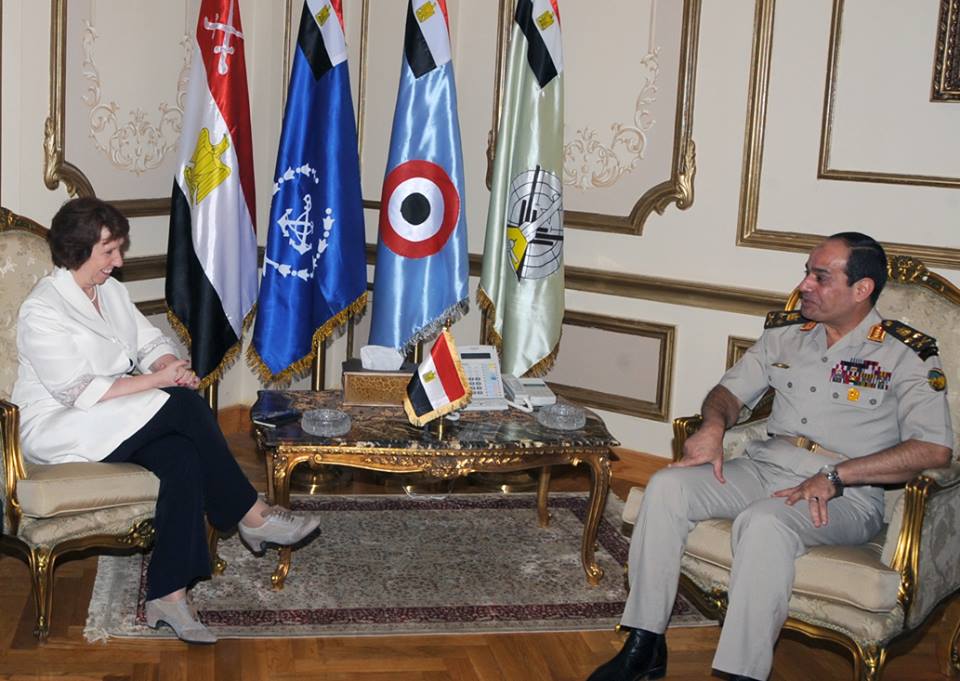 European High Representative for Foreign Affairs Catherine Ashton will reiterate the EU’s call for an inclusive transition process during her visit to Egypt on Monday.

The EU diplomat was scheduled to meet with “President Adly Mansour, Vice-President Mohamed ElBaradei, Minister of Defence Abdul Fatah Al-Sisi and other members of the interim government,” said an EU statement on Sunday evening. Ashton will also meet with representatives of the Muslim Brotherhood’s political wing the Freedom and Justice Party (FJP).

Al-Sisi hosted Ashton on Monday afternoon. The armed forces spokesman published a statement after the meeting saying the pair “exchanged views on developments in the Egyptian political scene and the democratisation process and the role of the EU during the current stage and the future vision to support stability in the region.” The statement also reported that Chief of Staff of the Armed Forces Sedki Sobhi and other high-ranking senior commanders attended the meeting.

Ashton met with Minister of Foreign Affairs Nabil Fahmy earlier on Monday. The foreign ministry published a statement following the meeting, which said Fahmy “presented the developments of the domestic scene in Egypt and the importance of reconciliation and the participation of all political forces in the ongoing democratic roadmap.” He also stressed the importance of denouncing violence and stopping incitement. The pair went on to discuss regional issues including the Syrian crisis, the Nile Basin issue and the dispute with Ethiopia over the Grand Ethiopian Renaissance Dam.

Ahmed El-Moslimany, media advisor to Mansour said in a press conference on Monday afternoon that he was unaware if Ashton requested to meet with former president Mohamed Morsi, but stressed that a foreign diplomat can meet with Morsi if they choose adding: “Morsi is facing charges but is not a political prisoner.” He added: “We are ruled by the Egyptian house, not the White House.”

The Anti-Coup Coalition (ACC) announced in a statement on Monday that a delegation will meet with Ashton on Monday afternoon, “upon her request.” The ACC delegation will include Mohamed Mahsoub from Al-Wasat Party, Mahmoud Taha and Mohamed Ali Bishr and Amr Darrag of the FJP. In addition former prime minister Hesham Qandil, described in the statement as “the legitimate Egyptian Prime Minister” will also attend the meeting.

Ahead of her visit Ashton said she would “speak to all sides and reinforce our message that there must be a fully inclusive transition process, taking in all political groups, including the Muslim Brotherhood.” She called for “constitutional order, free and fair elections and a civilian-led government.”

Ashton also said she would reiterate her call to end violence adding,:“I deeply deplore the loss of life. The EU is determined to help the Egyptian people on their journey to a stable, prosperous and democratic Egypt.”

This is the second visit Ashton has made to Egypt in as many weeks. Her second visit comes after the death of 89 people following clashes near a pro-Mohamed Morsi sit-in at Rabaa Al-Adaweya Square last Friday.