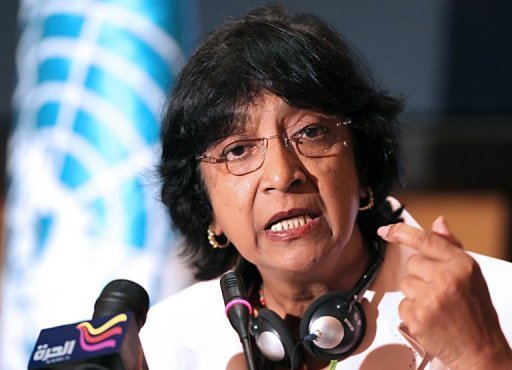 The aggressive approach taken by the military and security forces against protesters will lead to a “disaster”, UN High Commissioner for Human Rights Navi Pillay warned on Sunday.

Pillay called for an independent and prompt investigation into recent deadly violence in the country, her statements coming one day after the deadly violence that left at least 80 protesters dead and hundreds injured. The Muslim Brotherhood say casualties exceed 100.

It is extremely urgent that a “credible and independent” investigation be carried out, Pillay said, marking her second such call in one month. Pillay said if it is found that security forces used excessive force, the officers responsible should be charged and brought to justice.

Supporters of Morsi have the right to peacefully protest like anyone else, the high commissioner said, adding that while security forces have to act with respect for human rights, protesters must ensure that protests remain peaceful.

Pillay said she is extremely alarmed with the “increasingly dangerous polarisation” in Egypt. She called for an end to violence and hate speech and urged all parties to put their differences aside engage in national dialogue.

Although Pillay believes further protests are inevitable, given the events of recent days, she noted that “the onus is clearly on both the security forces and the protestors to ensure there is no repetition of yesterday’s terrible and deeply tragic events.”

In a letter addressed to Pillay on Saturday signed by over 15 international human rights organisations, the groups called on her to initiate an independent investigation into the “extrajudicial killings” that took place in the Rabaa Al-Adaweya clashes and in the Republican Guards clashes that took place earlier this month.

Earlier this month, deadly violence outside the Republican Guards headquarters left over 50 dead and hundreds injured.

They urged her to communicate with Egyptian authorities and the armed forces their obligation to protect peaceful demonstrators. They also called on Pillay to request that Egyptian authorities and the army prevent further polarisation and incitement through the media and to release all political prisoners, including former president Mohamed Morsi.

“We refuse the military trial of civilians,” the letter read. “The Egyptian government has consistently failed over the past years to conduct independent and impartial investigations into well-documented, serious abuses committed by security forces.”

They urged Pillay to dispatch a fact-finding mission to Cairo.

The organisations which signed the letter include the Switzerland-based Euromid Observer for Human Rights, the Austria-based Friends of Humanity International and the Sweden-based Justice Center.

Of the 17 signatories to the letter, the only Egyptian organisations were the Sawasya Center for Human Rights and Anti-Discrimination and Al Shehab Centre for Human Rights.

The organisations said serious violations of human rights against Morsi supporters have been documented, including extrajudicial killings, arbitrary arrests, and excessive use of force.

“The Egyptian authorities have not only perpetrated such acts, but also turned a blind eye to their practice by others,” the letter said.