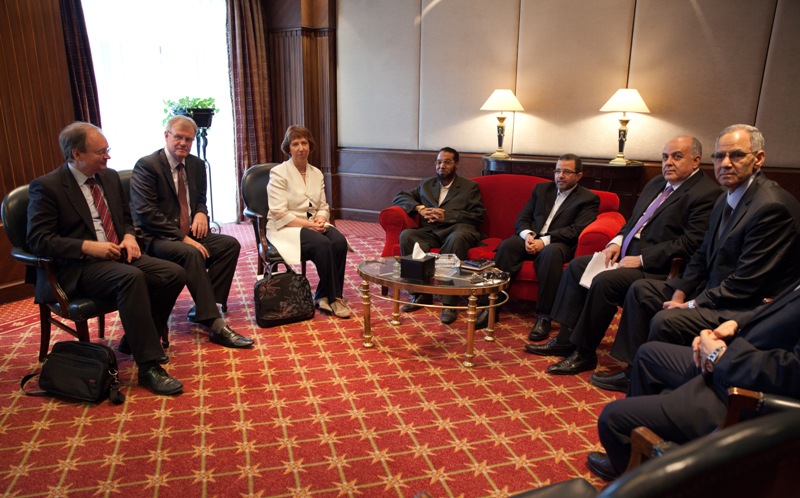 European High Representative for Foreign Affairs Catherine Ashton met ousted president Mohamed Morsi on Monday evening at an undisclosed location. She is the first foreign diplomat to meet Morsi since his overthrow.

The EU head arrived in Cairo on Monday and met with representatives of the interim government, including President Adly Mansour, Minister of Defence General Abdel Fatah Al-Sisi and Minister of Foreign Affairs Nabil Fahmy. Ashton extended her visit another day to hold additional meetings.

Interim vice-president Mohamed ElBaradei and Ashton held a joint press conference on Tuesday afternoon at the presidential palace. Ashton discussed her meeting with Morsi and stressed the importance of an inclusive path forward for Egypt. She said: “the EU is privileged to have the opportunity to help this country move forward.” She emphasised that her visit was not to act as mediator or to provide a solution but to talk to all sides and help them find a solution themselves.

“My message to everyone is the same: this great nation needs to move forward peacefully, any violence must stop and people must come together,” she asserted, adding: “only an inclusive process will work.” She acknowledged that this would be challenging, but called on the leaders to help make it possible.

ElBaradei said: “the immediate priority is to stop violence” which he said was “not the solution and we must try every possible way.” He agreed with Ashton on the importance of an inclusive process saying: “it is clear there is a new phase… Morsi failed but the Brotherhood continues and we want them to be included in the process.” He called for a peaceful end to polarisation and said: “once we lower the temperature and contain the violence there will be a peaceful way to disband demonstrations around the country and enter dialogue.”

Towards the end of the press conference Ashton excused herself, saying she had to catch a plane.

Ashton held a separate press conference on Tuesday morning at which she confirmed her meeting with Morsi and said the former president “is well” and has “access to television and newspapers” so they were able to talk about the current situation.

Ashton informed reporters that she told Morsi she would not try to represent his ideas for fear that she might misrepresent him and he would be unable to correct her. She also added that she does not know where he is currently being held.

The EU head said: “I would not have come to Egypt unless I could see him, and this was offered openly.” She also asserted that she was not in Egypt to provide a solution to the current crisis, but instead to “help facilitate ideas of people here to come up with a solution.” She stressed the need “to find a calm solution on the ground.”

The ACC said its delegation affirmed “its condemnation of the military coup” and “the demand for constitutional legitimacy,” in a statement published after the meeting. The delegation stressed to Ashton, “the return of the president [Morsi] is the basis of the solution.” The ACC delegation also affirmed: “the Egyptian people will not leave the streets and squares until constitutional legitimacy is restored, and the nation regains its true path.”

The ACC statement also “announced its complete welcome of visits by international human rights organisations to its various sit-ins,” and stressed the “peaceful nature of its activities, in contrast with repeated lies and all false accusations aimed at peaceful protesters.”

Ashton also met with Secretary General of the Arab League Nabil El-Araby on Tuesday morning. The pair discussed regional issues including the renewed Israeli-Palestinian peace talks and the crisis in Syria, according to a statement from the league following the meeting.