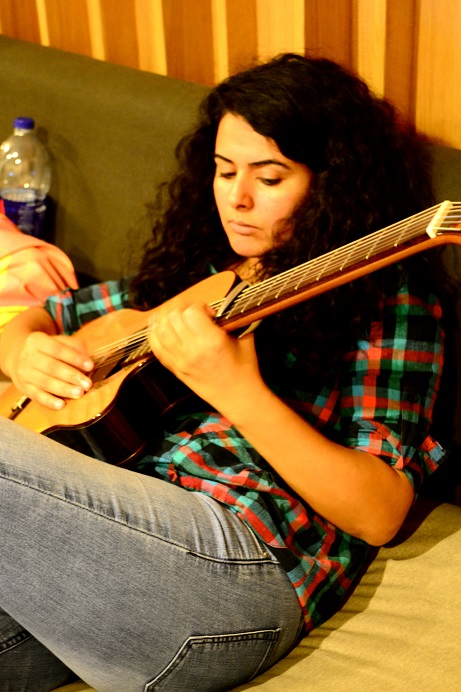 On stage or in person, it is hard not to be charmed by singer and musician Dina El-Wedidi. Relaxed and charismatic, her smile as she welcomes me into her studio in Heliopolis is infectious. Then again, with a lifestyle like El-Wedidi’s, it would be hard not to smile.

An emerging artist with an army of adoring fans, El-Wedidi is currently juggling recording her debut album with frequent journeys to far corners of the globe, news of which she drops into the conversation as though she were just popping to the koshk to pick up some cigarettes.

In a few weeks, she will fly to Brazil to record a song with her mentor, Brazilian singer song-writing legend, Gilberto Gill. In November, she hopes to launch her album at a festival with Gill in Venice.

But behind the smile, behind the globetrotting, is a talented and intelligent musician, whose international adventures have only made her more aware of her musical connections to the city she comes from.

A much-loved act on the local music scene, El-Wedidi is using the confidence gleaned from successful live performances to take a whole new approach to the sound of her album. “People are used to hearing me with the music formation of keyboard, bass and drums…but on this album we are trying for a new sound,” El-Wedidi said, adding she is finally “feeling free…to try what I really feel.”

This new found freedom manifests itself in a departure from the jazz fusion style popular in contemporary Egyptian music. Accordingly, El-Wedidi and her producer have rethought “every arrangement…every harmony” and made use of traditional instruments such as the rebab. The result should be a music which reflects what El-Wedidi describes as the “aggressive energy” of her generation and the cities they live in. She wants to be honest about the people who make up Egypt’s young, urban generation. “We are wearing jeans, not galabeyas, we are wearing t-shirts… we are not in the twenties,” she said.

El-Wedidi’s songs have an emphasis on percussion, which reflect the percussion of the city, the rhythms which regulate modern city life. “The energy of Cairo now… it’s more aggressive… more than jazz, more than fusion,” she said. El-Wedidi describes looking out over Downtown and seeing people rioting in one street, whilst others have coffee and shisha just two streets away. The sounds of unrest, she remarked, has at times almost become a new rhythm of the city – a new kind of percussion.

But it is not all smiles. El-Wedidi understands the dark side of this aggressive energy too. Last week she was forced to cancel a concert at the Opera House due to security issues which saw the Cairo Opera delay its entire Ramadan programme for this month. Political events have an impact on El-Wedidi’s music in more ways than one. Although she never discusses politics in her songs directly, the atmosphere of a country in the throes of change – bad, sad, or exciting – changes her voice and the melodies she produces. “I go and see what is happening on the street,” she explained, “I collect this energy and suddenly is comes out in a song or melody.”

Had the Opera not decided to cancel, El-Wedidi would have loved to have sung, despite the chaos going on around her. “Of course I would like to sing,” she said, “people need energy, they need to listen.” She sees a performance as a collective experience, in which the audience get the chance to share in a sense of hope and honesty she attempts to create with her music. To share in the happiness and sadness of what the country is going through. “It is about the message…the conscience of the singer…you have a responsibility to present your work,” she said. “You have to have a conscience all the time in your work, so that everyone who sees it will get this message.”