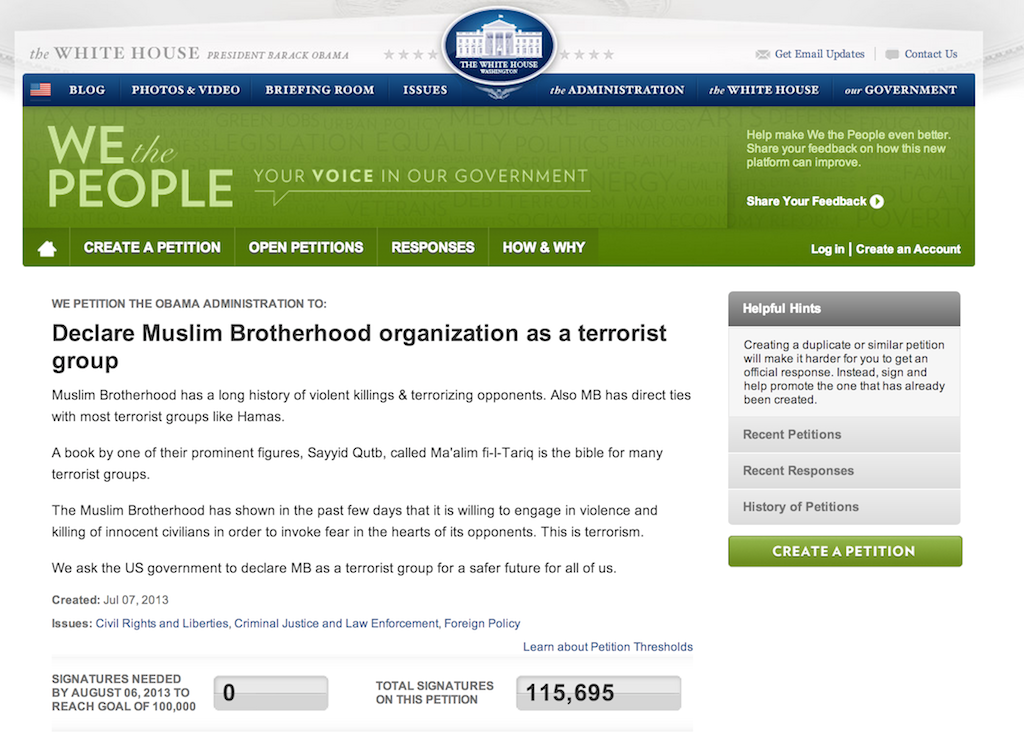 A petition to the US administration to declare the Muslim Brotherhood a terrorist group has gathered 120,000 signatures as of 5pm on Tuesday.

The petition was created on 7 July and gathered more than a hundred thousand signatures in less than a month.

The petition, offered by We the People portal on the White House website stated that the Brotherhood had a long history of violence and terrorism against its opponents.

It also accused the Brotherhood of having direct ties with terrorist groups such as Hamas.

“The Muslim Brotherhood has shown in the past few days that it is willing to engage in violence and killing of innocent civilians in order to invoke fear in the hearts of its opponents,” the petition read. “This is terrorism.”

The petition stated that Sayyid Qutb, a prominent Brotherhood leader authored a book called Maalim fi Al-Tareeq (Milestones) which is considered a manual for many terrorist groups.

We the People allows for the creation and signing of petitions to address the US government. In order to receive a response from the administration, a petition must first pass through two thresholds.

Although the We the People homepage says it is “giving all Americans a way to engage their government on the issues that matter to them”, the petitions are not restricted to US citizens.

The petition called on the Obama administration to declare the Brotherhood a terrorist group for a “safer future for all of us.”

Another prominent group, Al-Jamaa Al-Islamiya, has been listed as a terrorist organisation by the US since 1997. The group, represented in Egypt by their political wing, the Building and Development Party, had called on the US to be removed from this list in May.