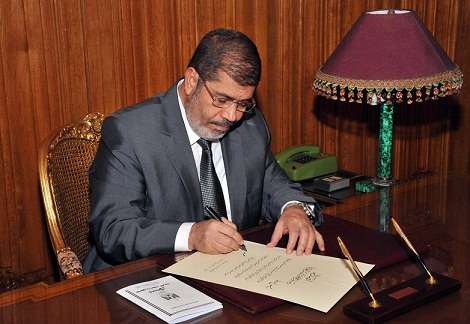 The constituent assembly supported by Tamarod and Al-Nour Party is amending the 2012 constitution but the 6 April youth movement and Monshaquon want to write an entirely new one.

The 6 April Democratic Front is also calling for the writing of a new constitution. According to Tarek Al-Khouly a member of the front, the 2012 constitution has a “dysfunction in the relationship between the legislative and executive powers”.

“Writing a new constitution is vital in stopping deals from certain groups that would apply pressure to keep certain articles in return for changing others” Al-Khouly added.

The Monshaquon movement issued a statement on Tuesday which declared their support for writing a new constitution instead of amending the 2012 one. According to the statement the 2012 constitution has several “flaws”; specifically in the articles regarding the armed forces, transitional justice and empowering the youth. Monshaquon is a movement that split from the Muslim Brotherhood and is based on empowering youth.

Al-Nour Party has previously announced that they are against re-writing the whole constitution and only wish to amend certain articles. Their former spokesman Nadder Bakkar said during the meeting the party had with Minister of Defence Abdel-Fattah Al-Sisi and other senior officials to create the roadmap, it was agreed that the “identity articles” will not be changed.