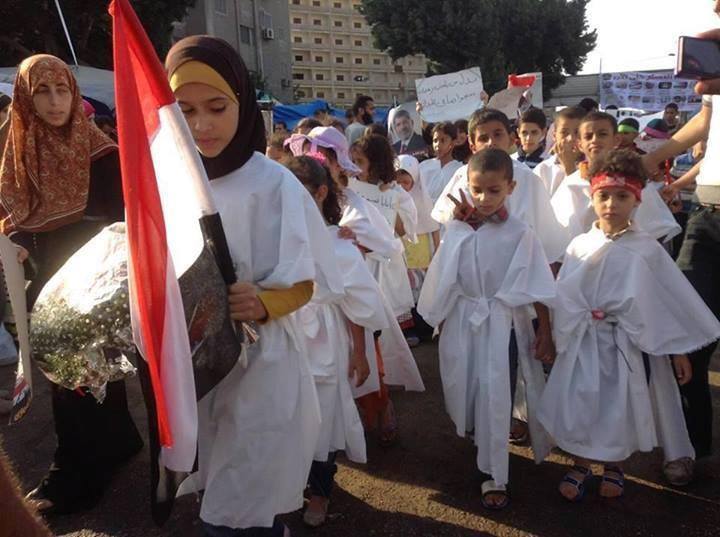 “I am very astonished at the position taken by so many media [outlets],” she said. “They have taken a very biased position vis a vis the 30 June Revolution.”

She accused Islamist demonstrators of using women and children as “human shields”, and said such practices would create a “new generation of terrorists.”

SIS chairman Mohamed Badr El-Din Zayed called the use of children in such political confrontations a “serious violation of the International Charter on the Rights of Child” and said such behaviour violated a number of human rights standards, stressing that such matters required the attention of the international community.

He described the current situation in the country as a battle between “terrorism and the state.”

The press conference played videos of alleged footage from inside the sit-in at Rabaa Al-Adaweya, showing children singing, “we are all martyrs,” and other images of children wearing death shrouds.

Nasr Al-Sayed, head of the National Council for Childhood and Motherhood, said there was some evidence that orphans from a local orphanage in Nasr City were being exploited in Rabaa Al-Adaweya.

Al-Sayed said that recent exploitation of children deserved attention by international organisations, adding that United Nations Children’s Fund (UNICEF) was the only one that had condemned the use of children in the political standoff.

On Wednesday UNICEF voiced “deep concern” over reports of killed and injured children during violent confrontations in Egypt, where it said they were “put at risk as potential witnesses or victims of violence” in a press release.

“We call on all Egyptians and political groups not to exploit children for political ends, and to protect them from any potential harm,” said UNICEF Representative in Egypt Philippe Duamelle.

Duamelle also noted that such actions could have a “long-lasting and devastating physical and psychological impact on children.”

On Thursday the National Salvation Front accused the Muslim Brotherhood of using children as human shields.

In a Wednesday statement the National Council for Childhood and Motherhood said it had filed a complaint to the Prosecutor General calling for the removal of children from the Rabaa Al-Adaweya sit-in, calling the participation of children in such demonstrations “exploitation”.