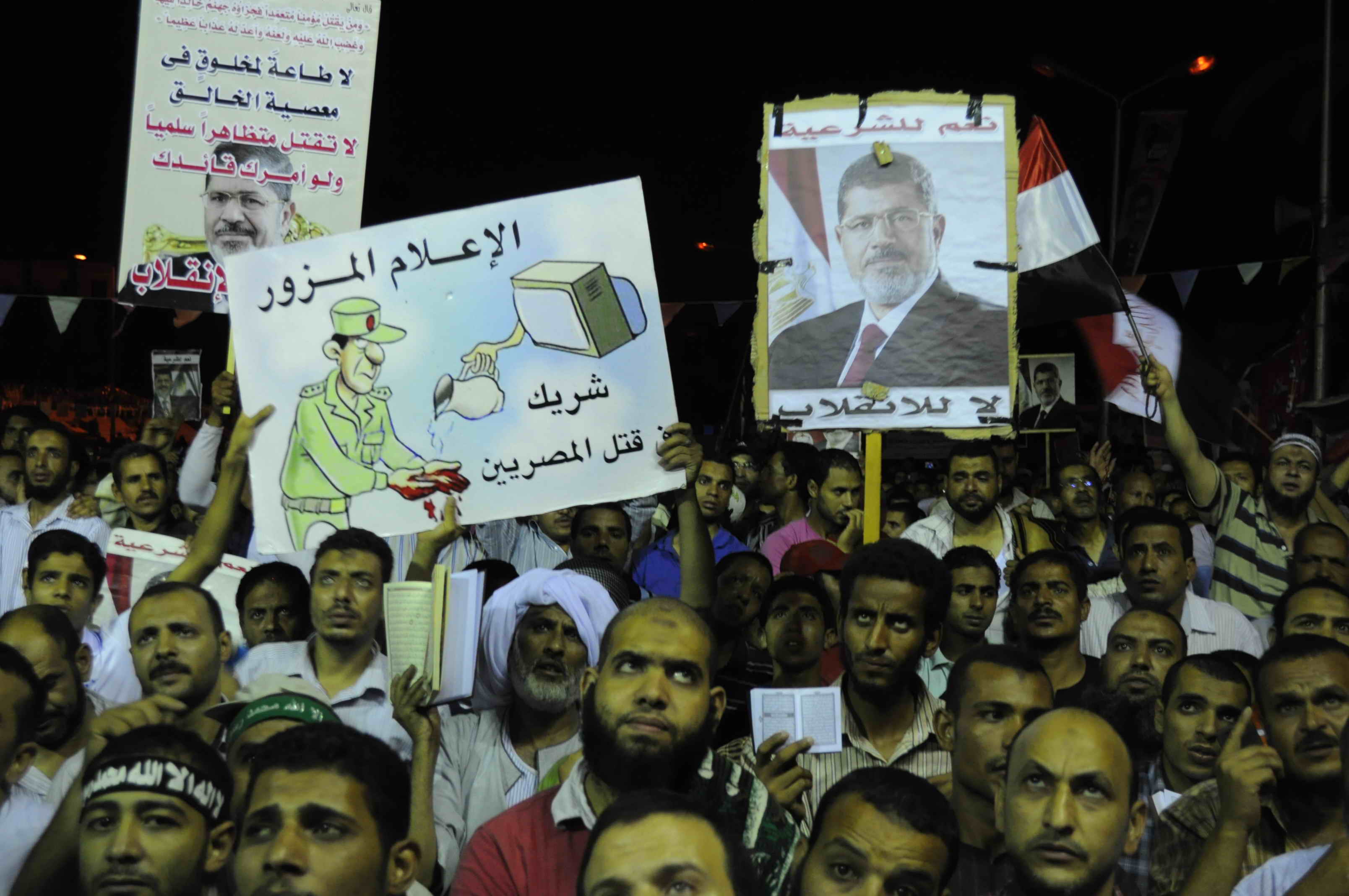 Dispersals of sit-ins should not be carried out violently, declared a number of human rights groups in statements on Thursday and Friday.

Civil society organisations warned against using violence to disperse protests of supporters of ousted president Mohamed Morsi, first in a joint statement by ten groups on Thursday, then in a press release by Human Rights Watch on Friday.

‘The main objective of any intervention of security must be to ensure public safety, prevent disturbances and protect the rights of others,” said the Thursday joint statement, stressing that a dispersal should not be considered until all options of “methods of persuasion, and mediation” were exhausted.

The organisations held the state accountable for the escalation of political violence across the country, citing the failure of the security apparatus to intervene and contain outbreaks of violence in cities outside of the capital.

The statement called on the state to adhere to international standards when dealing with demonstrations, which mandate that the state refrain from using force unless in the case of “extreme necessity” and that the amount of force used must be proportional to the threat within a legal framework.

The group also warned against the “indiscriminate use of force,” which had previously led to the deaths of dozens of protesters, adding that the use of firearms was not acceptable other than for the use of self-defence. “The security forces have to remember that their primary role is to restore security and reduce the amount of losses and damages- especially casualties,” said the groups in their statement.

The statement also warned that the killing of demonstrators, especially in a systematic context, would constitute a crime against humanity for which security personnel responsible should be held accountable.

Human Rights Watch echoed the sentiment of the Egyptian groups, saying, “authorities should respect the rights of all to peaceful assembly.”

“Prohibition of any particular demonstration, including dispersal, must be a last resort. Imposition of restrictions and bans on demonstrations should be subject to appeal before an independent and impartial court,” read the HRW report.

HRW also stressed that the sit-ins supporting Morsi were densely populated with women, children, and men and should be dealt with accordingly.

On the other hand, HRW also noted that it had spoken to people who had been detained by protesters and tortured and also cited incidents of clashes in Manial and Bein Al-Sarayat.

“The authorities should investigate criminal allegations, but the actions of individual protesters do not provide sufficient justification for forcible dispersal,” said the release.

HRW cited the UN Basic Principles on the Use of Force and Firearms by Law Enforcement Officials, which stresses the use of nonviolent means before resorting to use of force and firearms.

A collective of human rights groups visited the sit-in at Rabaa Al-Adaweya on Thursday. Members of the delegation including Mohamed Adel of ECESR accused members of the sit-in of banning the group from photographing any footage inside the protest on his Twitter account.

He also said the delegation was prevented from entering the sit-in’s media centre and field hospital.

He also accused Islamist activists Abdel Rahman Ezz and Ahmed Al-Mogheer of attempting to attack him and Mokhtar Mohamed of the Hisham Mubarak Law Centre in front of Brotherhood members Ahmed Sobaei and Sayed Bassiouny.

“Unfortunately sit-in officials did not intervene in any way to stop what was happening to the delegation,” he added.