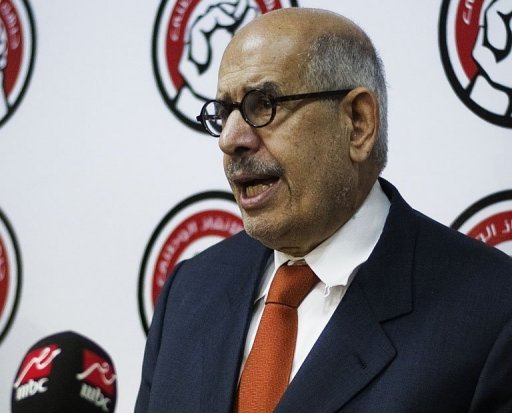 His comments, in an interview with the Washington Post, were published Friday as Morsi supporters staged fresh rallies in Egypt in defiance of government orders that their protest camps be broken up.

“What we need to do right now number one, of course, is to make sure that we stop the violence,” said ElBaradei, a secular Nobel Peace laureate and former UN nuclear negotiator.

More than 250 people have been killed in recent weeks as clashes have erupted around the mass protests by the Muslim Brotherhood calling for Morsi’s reinstatement.

The Islamist movement, which dominated elections held in the wake of the 2011 overthrow of Hosni Mubarak, has refused to negotiate with the military-backed interim government.

Dozens of members of the Muslim Brotherhood have been jailed since Morsi’s ouster, but ElBaradei held out the offer of immunity for those not implicated in serious crimes.

“They need to cooperate. But they need of course to feel secure, they need immunity, they need to feel that they are not excluded. It’s things we are willing to provide,” he said.

But he also indicated more hardline voices in the security forces and interim government could prevail, raising the likelihood of violence.

“People are very angry with me because I am saying, ‘Let’s take time, let’s talk to them.’ The mood right now is, ‘Let’s crush them, let’s not talk to them,'” he said.

“We need to get a long-range view based on restoring order and based on national consensus and reconciliation. I hope the Brotherhood understands that time is not on their side.

“I’m holding the fort, but I can’t hold it for very long.”