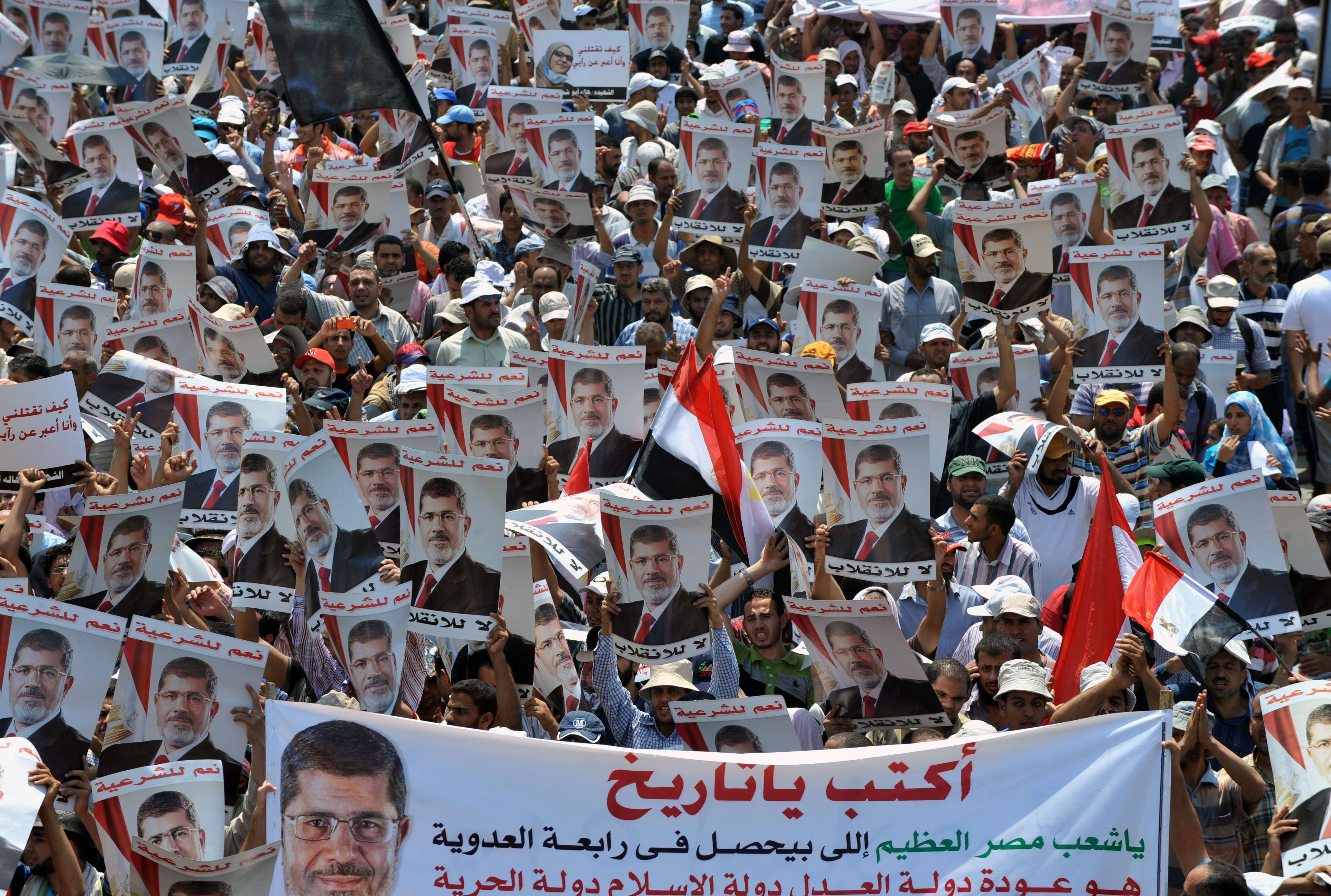 Morsi supporters attempted to start a third sit-in at Alf Maskan in Heliopolis, near the capital’s international airport, on Friday evening but were prevented from occupying the area. At the same time, a pro-Morsi march to the Media Production City to protest media bias ended in clashes between demonstrators and police.

The clashes, which left 23 protesters and one conscript injured, started when the police fired tear gas at the march approaching the media complex. Protesters responded by hurling rocks at security forces, and according to the interior ministry, by firing weapons, an accusation that Muslim Brotherhood spokesman Ahmed Aref denied.

Thirty-seven pro-Morsi protesters were arrested on charges of attempting to break into the complex. According to interior ministry spokesman Mohamed Menady, a conscript was injured by a gunshot wound during the clashes.

The interior ministry described the protesters as “groups that aimed to wreak havoc and terrorist elements affiliated to the Muslim Brotherhood… that were carrying firearms,” in a statement published on Facebook.

In Heliopolis, Morsi supporters were prevented from setting up a protest camp in the area by what the interior ministry said were residents of the area. The residents reportedly burnt tents erected by the protesters and chased them out of the neighbourhood. However, Aref denied that it was Alf Maskan residents who attacked the protesters.

“They were either thugs hired by the National Democratic Party or police officers dressed in civilian clothes,” Aref said.

Morsi supporters also failed to launch a sit-in outside the Mostafa Mahmoud Mosque in Mohandessin as they had planned on Friday.

The attempt to extend protests came in defiance of the interior ministry calling on Morsi supporters to leave the Rabaa Al-Adaweya and Nahda Square camps, which it has described as “a threat to national security.”

The latest in the ministry’s series of official statements on the sit-ins promises a safe exit to protesters who leave Rabaa Al-Adaweya and Nahda Square on the condition that they have not committed any crime.

The statement, published on Friday, warns Morsi supporters that remaining in the protest camps “where unlawful activity has taken place, including murder, torture, kidnapping, carrying unlicensed weapons and inciting violence,” would place them in a legally vulnerable position.

The statement also included accusations against the sit-in’s leaders of “brainwashing” their followers and filtering the flow of information going into the protest camps.

“The Ministry of Interior is calling on you to expose yourself to the views of political groups, revolutionary forces, public institutions, civil society and international organisations on the unlawful practices carried out in the Rabaa and Nahda sit-ins,” the statement said in a direct address to the protesters, urging them to seek alternative means to achieve their political goals.

On Friday, state television reported that security forces plans to lay siege to the two areas, allowing protesters to leave but barring anyone from entering, with the aim of ending the sit-ins.