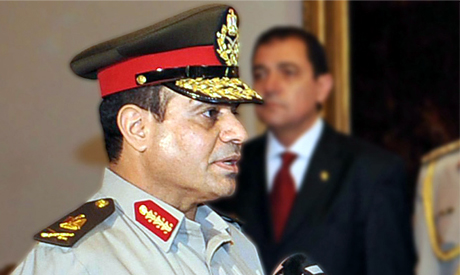 Commander of the Armed Forces General Abdel Fatah Al-Sisi met with Islamist leaders according to a statement released by the armed forces spokesman on Sunday.

In the meeting the army said the Rabaa Al-Adaweya and Al-Nahda Square sit-ins would not be dispersed by force as long as roads were not blocked nor public buildings attacked, the spokesman’s office said on Sunday.

According to a video of Hassan discussing the meeting, other Islamists included were Mohamed Abu Mousa, High Committee member of Al-Azhar Scholars, Gamal El-Merkaby and Mohamed Abdulsalam. Hassan said the meeting included other members of the Supreme Council of Armed Forces as well.

Borhamy said he supports the meeting and that reconciliation has to include everyone.

Freedom and Justice Party spokesman Tarek Al-Morsi said that no Muslim Brotherhood members were involved in the meeting and that it doesn’t represent the Anti-Coup Coalition.

Al-Morsi and Borhamy both said that most attending the meeting were Salafis.