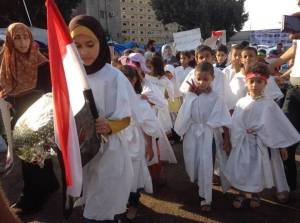 Shubra Al-Khayma police station prosecution ordered on Tuesday the release of two men accused of gathering children and taking them to sit-ins in support of ousted president Mohamed Morsi in exchange for a reward.

Authorities detained 42 children, who are mostly residents of Atfeeh City in Giza, earlier on Sunday after they suspected that they were being transported to the Rabaa Al-Adaweya sit-in, according to a statement by the Ministry of Interior.

Ahmed Youssef Sadeq, a teacher at a religious organisation in Atfeeh, was arrested with the children alongside Mohamed Ibrahim, head of a religious organisation in Giza, reported state-run news agency MENA. Both men were accused of gathering almost 200 children in buses, mostly orphans, to take them to the pro-Morsi sit-in at Rabaa Al-Adaweya, under the pretext that they would buy them new clothes.

The detainees were released, pending the results of the Homeland Security investigations regarding the incident, MENA reported. The prosecution also ordered an immediate report into the Association for Preservation of the Quran, the religious organisation which employs Ibrahim, that they say will clarify the activities of the organisation and its source of funding.

Arrested children claimed during their investigation that some of them had visited the Rabaa sit-in before, MENA reported. They also claimed the people who gathered them from some Giza villages promised to give them EGP 100 and a meal each, as well as buy them clothes, all on condition that they accompany them to the Rabaa sit-in.

Nasr Al-Hafy, a Muslim Brotherhood lawyer, denied that children have been brought to the Rabaa sit-in in exchange for a reward.

“[General Abdel Fatah] Al-Sisi and his gang are the ones who used to hire children to throw molotov cocktails during protests,” Al-Hafy said, referring to protests held when Morsi was in power. “They think everybody is like them.”

Rights organisations condemned children’s participation in sit-ins in a press conference held by the State Information Service (SIS) on Friday, while the National Salvation Front (NSF) accused the Muslim Brotherhood of using them as human shields at protests in a statement they released on Thursday.

The National Council for Childhood and Motherhood had filed a complaint to the prosecutor general on 31 July accusing the Muslim Brotherhood of exploiting children at protests and calling for their removal from all pro-Morsi sit-ins.