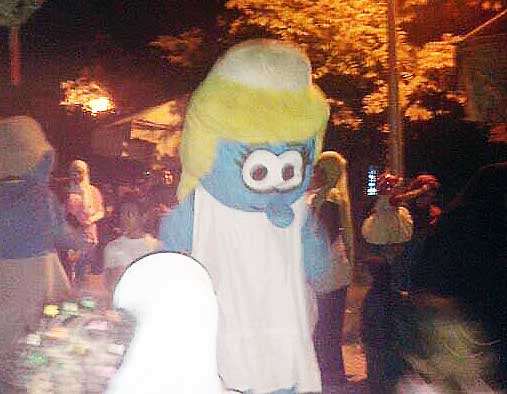 You know it is going to be a good party when they bring the giant Smurfs out.

No, I had not taken anything. I was standing in semi-darkness in a park in Mohandessin, surrounded by a gaggle of over-excited children dancing in circles around a group of men in full-body Smurf costumes. Just when I thought things were getting a bit too David Lynch, my friend Omar Magdy Youssef charged in, clad in an animal mask and a jaunty party hat, spraying dubious foam from a can over all and sundry. The kids went mental.

“It is something we do every Ramadan,” Youssef had said a few days previously, when he had invited me to what I had thought would be a charity iftar event for children suffering from cancer, organised by a group of my friends. The event they had masterminded was both more anarchic and more…deliciously bizarre than I had anticipated. More was to come, for I had yet to encounter a giant Dora the Explorer, a gargantuan Ben 10, a normal-sized magician and a pantomime horse.

“Most people do something charitable in Ramadan,” said Youssef, once he’d unmasked and surrendered his can of foam. “Some people go to the poor and give them money or food…we thought we might do something with our own hands for children who have cancer…we try to make them happy just before Eid.”

Charity and volunteerism is part of the more thoughtful, pious mood which is supposed to accompany the holy month, and so individual ventures like this are not uncommon. Youssef and his friends have been organising parties for kids with cancer for three years now. They work with an organisation which looks after the kids, some of whom are orphans, paying for their food, and helping to get them to and from the hospital.

Each year the party has improved, he said, and this year the group managed to collect over EGP 10,000 from their families and friends. They hope to use the extra money to put on another, similar party in a few days time, with a similar organisation.

“We try to make the kids smile,” Youssef explained. “Cures can be psychological as well as physical…these kids want to get better, they want to live a better life…this party is the beginning of that.”

It was a mark of the party’s success that it was easy to forget that the kids are ill. Three girls linked arms and ran off together, giggling and gossiping. The boys showed off in front of Smurfette, throwing moves like break-dancers. One young girl, no older than seven, charged around trying to get people to spray party foam on her head. She had lost all her hair during chemotherapy, and must like the feel of it on her bare skin. Each time she succeeded in her mission, she giggled deliriously.

A sea of stern black and brown abbeyas which clad the women who accompanied their children to the party suggested that they might not buy in to this smurf-based nonsense.

Wrong. They got fully involved. The women who were not spraying foam in my hair set about trying to teach me to dance. One woman engaged in a dance off with Papa Smurf and almost certainly won. Another grabbed the pantomime horse and led him around the park, swinging her hips as she walked.

The phrase, “the spirit of Ramadan” gets thrown around a lot. A bit like “the spirit of Christmas”, it can sound sentimental and overblown at the best of times. And it has been hard to find recently. In the context of the recent unrest and national division, “the spirit of Ramadan” had lost its meaning to many. But I think I found it again in that park in Mohandessin. In the midst of personal tragedy, in the midst of national tragedy, when a fully grown woman can dance at dusk in a park with a pantomime horse, how bad can things be?