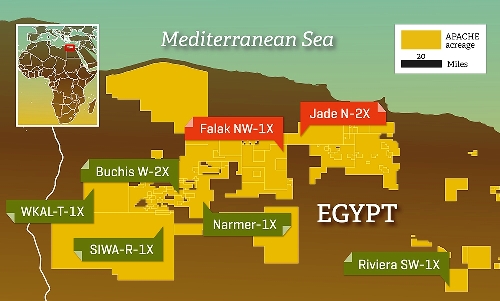 The US firm Apache Corporation reported on 1 August seven oil and gas discoveries over the last three months that indicate the geologic and geographic diversity of resources in Egypt’s Western Desert.

Apache said four of the discoveries were in the Faghur basin with one each in the Shushan, Matruh and Abu Gharadig basins.

“These seven discoveries are located in four different geologic basins and six different concessions,” said Thomas Maher, the regional vice-president and general manager of the Apache Corporation in Egypt.

Maher also reported that all seven discoveries have been tested and the Riviera SW-1X oil well is already producing, and the exploration and development program continues apace with an average of 27 drilling rigs operating during the second quarter of this year.

Riviera SW-1X was reported to be producing a restricted rate of 2,000 barrels of oil per day. Executives said the well, which cost $5m to complete, would be monitored for gas production, which in the test stage
reached 2.8m cubic feet a day.

Development lease applications have been submitted to the Egyptian General Petroleum Company for future oil and gas production. Apache has a 100% contractor interest in the West Kalabsha Concession.

Apache is an oil and gas exploration and production company based in Houston, Texas, with operations in the United States, Canada, Egypt, the United Kingdom, Australia and Argentina.