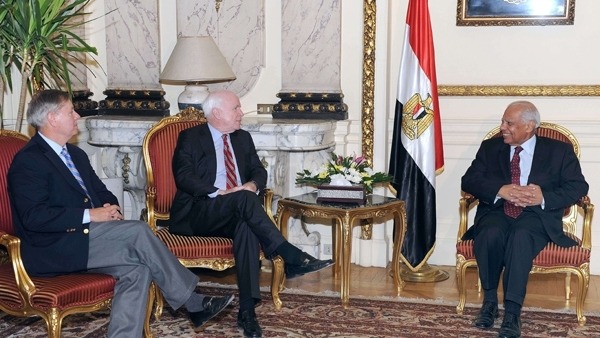 United States senators John McCain and Lindsey Graham on Tuesday urged immediate action from both sides of Egypt’s political impasse in the face of civil unrest.

“It is essential for all parties to refrain from acts and incitement of violence. We believe they should treat each other with respect,” said McCain during a Tuesday press conference in Cairo. “We also urge the release of political prisoners…[and] a national dialogue that is inclusive of parties including the Muslim Brotherhood.”

“At the same time we expect the Muslim Brotherhood to refrain from violence,” added McCain

“We’re hopeful that the transition will be one of going back to democracy,” said Graham. “That is the only type of transition we can support.”

The senators, who arrived to Cairo on Monday, met with members of the interim government, Commander-in-Chief of the armed forces Abdel Fatah Al-Sisi, and supporters of the ousted president Mohamed Morsi, including members of the Freedom and Justice Party, according to McCain.

The two senators stressed the importance that calm be restored to the streets of Egypt and that the upcoming transition be one conducive to the “return of democracy” to the country.

“We have urged the interim government and the armed forces to protect the rights and freedoms of all Egyptians and their right to protest peacefully,” said McCain, who also added that the “demonisation” of the United States in Egyptian state media was “harmful to our relationship.”

“Violence will kill (literally and figuratively) the future of Egypt….if 400 more die, it is going to be very difficult to put this country back on track,” said Graham.

McCain also said that in his meetings with Egyptian officials he had urged the release of “political prisoners” and pressed for national dialogue, the amending of the constitution, and elections all under a strict timetable.

The senators indicated that they saw the release of Muslim Brotherhood leaders who are currently detained as a first step to curb ongoing violence in the country, but also called on the ousted president’s supporters to be peaceful.

“If you think you’re going to restore legitimacy through violence, that is the worst possible act you could take,” said Graham. “I am here to tell those who feel wronged in the Muslim Brotherhood and those who supported president Morsi that violence will only marginalise you throughout the world.”

Both senators also said that upcoming elections should involve international observers and monitors.

Graham stated that the United States could not revive the policies it had under Mubarak, a relationship that “was not beneficial to the average Egyptian.”

“Those days are behind us as a nation,” he said.

The senators both stated that the change in power that came on 3 July was a coup d’état. “If it quacks like a duck and looks like a duck, then it’s a duck,” said McCain, who added that Hosni Mubarak’s 2011 ouster was also a coup, but one that came as a result of violence that was “not sustainable.”

Said Graham, “the people in power weren’t elected and the people who were elected are now in jail.”

“I believe the Morsi election was free and fair. I believe the way he governed alienated the army and millions of Egyptians,” he added.

The senators insisted that they did not want recent political developments in Egypt to damage the ties between the two countries.

“There are some in Congress that want to sever this relationship,” said Graham. We want to maintain it.”

McCain added that cutting off aid to Egypt would be the “wrong signal and the wrong thing to do at the wrong time.

The senior American politicians also stated that they did not come to contribute to ongoing negotiations.

“My message to the Egyptain people is simple,” said Graham. “We’re here to help find an Egyptian solution to an Egyptian problem.”

“We are here as longtime friends of Egypt,” said McCain “to urge them to avert the catastrophic consequences of the path that may transpire if they stay on the path they’re on of polarisation.”

“We explained our point of view and position and the reasons why we are here in hopes that this process will move forward.”