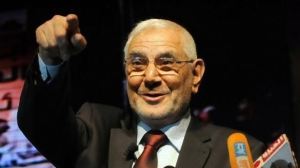 Misr Al-Qawia party has demanded the release of former president Mohamed Morsi as part
of a political solution to the current crisis.

The party, founded by former Muslim Brotherhood member and former presidential
candidate Abdel Moneim Abul Fotouh, released a statement on Tuesday detailing sections
of its solution: “based on preserving the right of peaceful protesting simultaneously with
facing terrorism.”

The party said security institutions, such as the police and the armed forces, must secure all
protests and sit-ins, both those in support of Morsi and those against him, saying that such
security measures should be guaranteed by interim president Adly Mansour and monitored
by domestic and international human rights organisations.

The party demanded the release of the ousted president and all those held with him
pending legal investigation.

Misr Al-Qawia also demanded that the National Coalition to Support Legitimacy (NCSL), a
coalition set by Morsi-supporters calling for his return to power, clear their sit-ins from all
arms, and allow for domestic and international human rights organisations to verify the
clearance. The party also demanded the coalition condemn the Sinai attacks and all other
sorts of violence, as well as stop “their incendiary and sectarian” speeches.

Should the aforementioned be done, the party called for direct negotiations between both
parties. It suggested holding a referendum on the road-map announced by General Abdel
Fatah Al-Sisi during his speech on 3 July in which he announced the ouster of Morsi.

Misr Al-Qawia called for reopening Islamist TV channels closed after Morsi’s ouster, and
prosecuting those responsible for the shutdown.

It demanded issuing a “special” law to punish all those who use the media to incite hatred,
violence or sectarianism. It also urged investigations into all media violations which took
place throughout the past year.

To achieve national reconciliation, the party envisioned that the current Minister of Interior
Mohamed Ibrahim be removed from his post, and the halt of his reinstatement of former
Sate Security officers to their posts. Ibrahim announced in a press conference on 27 July that
he would restore all former State Security officers who were removed from their posts
following the January 25th Revolution in 2011, adding that the Homeland Security Agency
was reconstructed poorly after the 2011 revolution.

Misr Al-Qawia also called for the appointment of a new prosecutor general, to replace
Hisham Barakat, in a manner that conforms to the 2012 constitution.The party demanded the formation of an independent committee comprised of rights
activists and independent judges to immediately look into the incidents of; the Nasr Road
violence, the Republican Guards clashes, Bein El-Sarayat clashes, the Manial clashes and
Mansoura clashes.
Misr Al-Qawia stated that transitional justice dictates that all those responsible for violations
of rights since the ouster of president Hosni Mubarak should be held accountable. It added
that the transitional justice should be sponsored by independent public and judicial figures,
in the presence of political parties’ representatives, as well as representatives from the
armed forces, the police, the media, intellectuals and youth movements.

Delegations from the United States and the European Union have visited Egypt in response to the
current rift between groups supporting Morsi and those supporting the change in power
that occurred on 3 July.