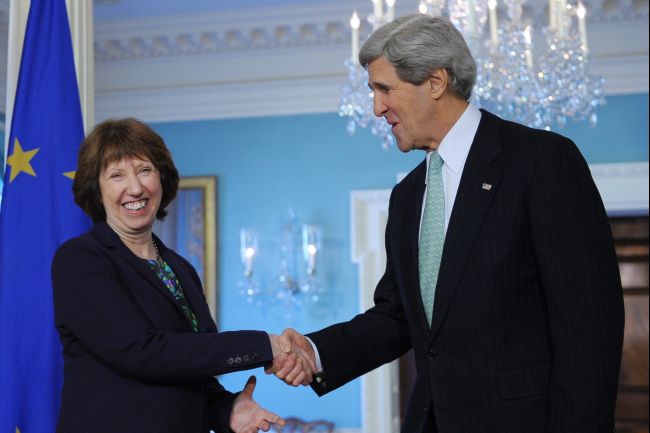 The Egyptian government bears a “special responsibility” to begin the process of reconciliation and ease of tensions in Egypt, said United States Secretary of State John Kerry and European Union High Representative Catherine Ashton in a joint statement.

The statement  comes on the heels of visits from US Deputy Secretary of State Bill Burns and Special Representative for the Southern Mediterranean Bernardino Leon to Cairo. The two   hoped to “urge the government and opposition parties to begin a process of genuine reconciliation, and move ahead inclusively to consider amendments to the Constitution and prepare as quickly as possible for…elections,” according to Kerry and Ashton.

The statement provided a number of “practical ideas” to calm tensions in Egypt including public statements condemning violence in support of a peaceful resolution, and a commitment to “meaningful negotiations.”

This would include, according to the statement, an easing of tensions surrounding pro-Morsi sit-ins at Rabaa Al-Adaweya and Nahda Square and the “immediate release” of detained political figures.

Kerry and Ashton called on the Egyptian government to make efforts to avoid the threat of violent confrontations amidst a “fragile situation.”

“We take this moment to reaffirm that the United States and European Union remain deeply committed to a strong, democratic, inclusive, and prosperous Egypt,” they said.

“We are firmly opposed to violence, support the right to non-violent protests, and realise that progress in Egypt can only come through a peaceful political process in which all parties can compete on an equal footing.”

Burns and Leon both concluded visits this week to Cairo during which they talked with members of the interim government, Commander-in-Chief of the armed forces Abdel Fatah Al-Sisi, and leaders of Islamist groups supporting the return of Mohamed Morsi to the presidency.