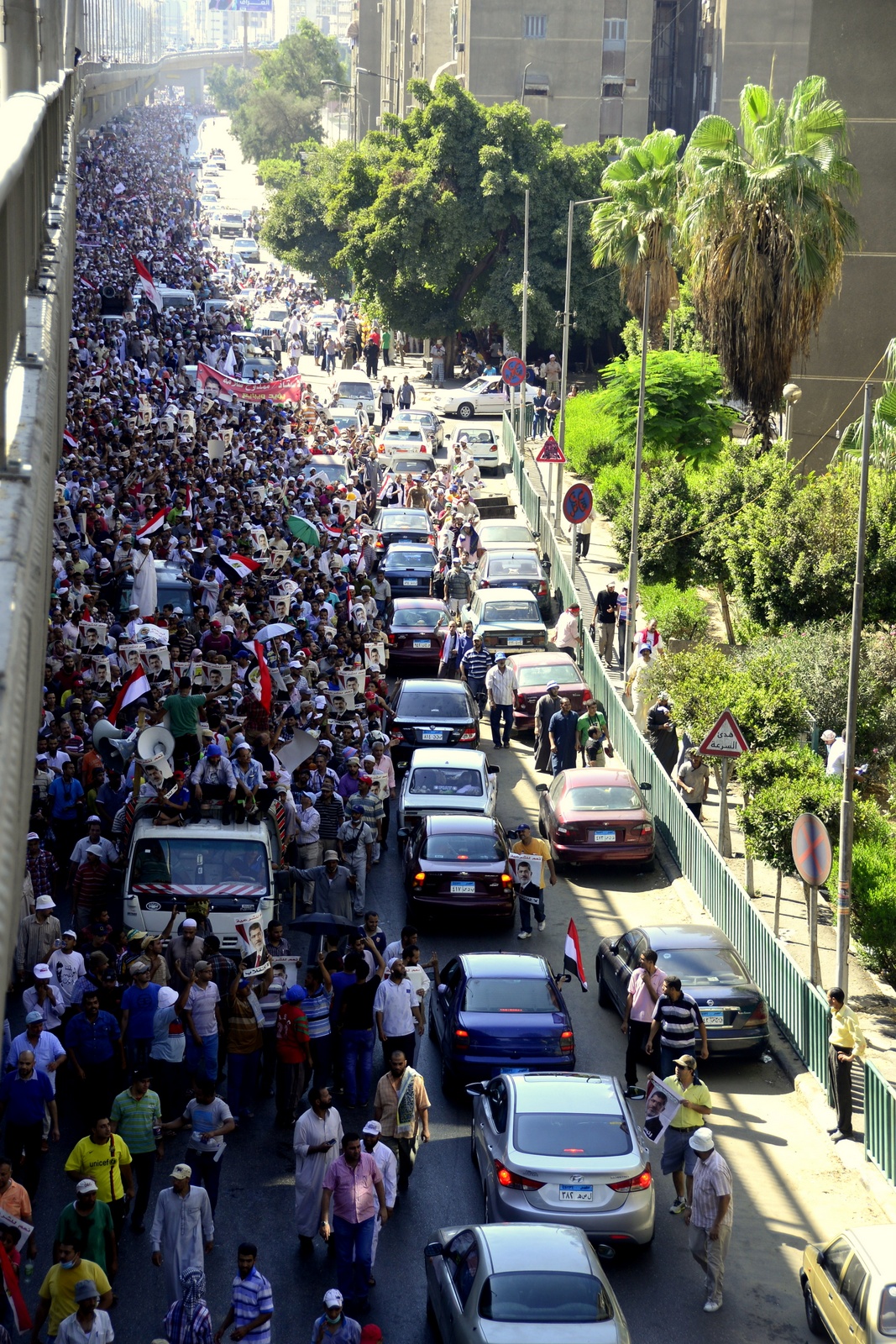 Ousted president Morsi’s supporters began their marches on Friday after noon prayers from several locations across Cairo to converge on the ongoing sit-ins at Rabaa Al-Adaweya in Nasr City and Nahda Square in Giza.

On Friday morning, the Anti-Coup, Pro-Legitimacy National Alliance called on “the masses of the great Egyptian people” to march on Rabaa Al-Adaweya and Nahda Square after Friday prayers. In the statement, which was published on the Muslim Brotherhood’s English language website Ikhwanweb, the alliance congratulated the “tens of millions of Egyptians” who took to the streets on Thursday to participate in “Victory Day activities” Thursday’s turnout, and confirmed that “the coup has failed.”

Demonstrators marched from Ramses Square, via the al-Nour mosque in Abbaseya to Rabaa Al-Adaweya. Groups of men wearing high-visibility jackets, motorcycle helmets and brandishing batons and wooden sticks secured the edges of the march, which swelled to several thousand as they progressed through downtown Cairo.

Many marchers chanted slogans against the military “coup”, while others held photographs of victims of recent violence alongside portraits of the ousted president. One stuck a poster of former president Mohamed Morsi on the outer wall of the Abbaseya Cathedral as the march passed by.

The march passed onto Nasr Road, `the scene of recent violence, without incident. The demonstrators filed through the reinforced barriers of Rabaa Al-Adaweya, the exterior of which had been painted blood-red. A tank emblazoned on one end of the barrier had it’s barrel pointed towards paintings of those killed in previous clashes.

Small memorials made from paving tiles were erected at the entrance of Rabaa Al-Adaweya, some containing personal effects of those killed in the clashes, while other memorials listed the names of the deceased.

Dr Mohamed Tarek, who claimed he helped to form the Alexandria branch of the April 6th Youth Movement, said he, alongside a number of others, had left the organisation and had joined the sit-in at Rabaa Al-Adaweya.

“The case now is more than just about Morsi,” he said. “The rights of the martyrs killed by the police and their thugs make the situation more difficult,” said Dr. Tarek.

“We hoped that the police would have a better policy regarding dealing with demonstrators,” he added. “But unfortunately they [the police] have the same policy as under Mubarak.”

In their statement, the Anti-Coup Alliance called on their supporters to “join together in peaceful protest and peaceful struggle to restore the democratic process.” However, as the demonstrators marched under the collective banner of “The people want to overthrow the coup” in several governorates, clashes erupted between them and anti Morsi groups.