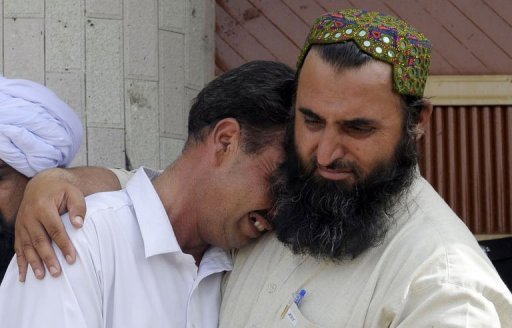 AFP – Muslims marked the Eid al-Fitr festival Thursday with feasts and prayers, even as bombings killed dozens of people in Asia and the threat of fresh violence loomed in the Middle East.

A suicide bomber killed 38 people and wounded 50 others, most of them policemen attending the funeral of a colleague killed earlier in the day in Pakistan’s southwestern city of Quetta.

The explosion in Pakistan’s restive Baluchistan province capped a bloody Ramadan for the country, where at least 11 attacks have killed more than 120 people.

A blast in eastern Afghanistan killed at least 14 as a group of women and youngsters gathered to mourn the late wife of a pro-government tribal leader as part of their prayers for Eid al-Fitr, the holidays marking the end of the Muslim fasting month of Ramadan.

In a tense Egyptian capital, backers of deposed president Mohamed Morsi were bracing for a police assault on their barricaded Cairo camps, where children in new clothes for the start of the holiday were treated to carousels and trampolines for their Eid revelry.

The tent camps in Rabaa al-Adawiya and Al-Nahda squares were set up after the army deposed Morsi on July 3, and the protesters have sworn to stay put until the army-ousted president is reinstated.

On Wednesday, the interim government vowed to break up the camps after the failure of international efforts to broker a compromise. It is thought such a move could come as early as Sunday, once the three-day holiday is over.

But in a carnival atmosphere for Eid, enthusiastic children caused a ruckus as they gathered in front of a huge stage normally used by Muslim Brotherhood activists to make fiery speeches.

The stage was commandeered by three children dressed up as cartoon characters, with even marshalls in orange dayglo vests placing their clubs and iron bars under their arms and joining in the clapping.

In Syria, the authorities were kept busy denying media reports and rebel claims of an attack on embattled President Bashar al-Assad’s motorcade as he drove to a central Damascus mosque for Eid prayers.

“Regarding the information reported by Al-Arabiya, I can assure you that it is completely false,” Information Minister Omran al-Zohbi told state television. “Everything is normal … They wanted to spoil the celebrations for Syrians.”

In a grim tally, the Syrian Observatory, which compiles its information from activists on the ground and medics, said the civil war had claimed at least 4,420 lives during Ramadan.

Tunisian Prime Minister Ali Larayedh vowed that his cabinet will focus on dialogue with its detractors to resolve the North African state’s political crisis sparked by an opposition leader’s assassination last month.

“Dialogue is the best way to overcome difficulties and resolve current problems,” he said in a message for the start of Eid.

Amnesty International urged the Islamist movement Hamas that rules Gaza to halt prisoner executions planned for after the holiday season, which is to be celebrated in the Palestinian territory until Sunday.

“The Hamas authorities in Gaza must halt several executions they say they plan to carry out” after the festival, the London-based rights watchdog said.

In Algiers, long-time President Abdelaziz Bouteflika, who returned home on July 16 after more than 80 days of medical treatment in France, made an unprecedented no-show at prayers in the Grand Mosque.

Back in Asia, Thai police on Thursday used water cannon to prevent scores of Muslim Rohingya boat people from Myanmar breaking out of a detention centre to celebrate the end of Ramadan, officials said.

Elsewhere, Indonesia was among the first countries in the Islamic world to kick off Eid celebrations, but fears of fresh attacks at Buddhist sites prompted a security clampdown days after a temple bombing.

Malaysia’s Islamic authorities called for Muslims to strengthen the unity of the nation in the aftermath of controversial elections in May that saw the Muslim Malay ruling party retain its grip on power.

Muslim communities in the Philippine capital Manila welcomed visitors into their homes to feast in keeping with tradition, and adorned local mosques.

Pakistan and India were among nations expected to start festivities on Friday rather than Thursday.