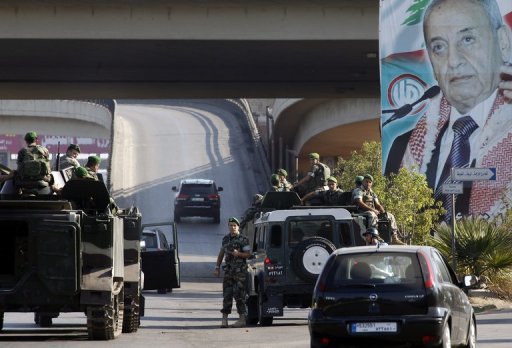 The kidnap is believed to be linked to the abduction of nine Lebanese pilgrims in Syria, whose families have urged Turkey to use its influence to secure their release.

“A kidnapping operation took place at 3:00 am targeting a bus carrying several members of a Turkish Airlines crew going from the airport to the hotel,” Charbel said.

“Gunmen kidnapped two passengers from the bus, the pilot and co-pilot,” he added.

Lebanese sources said four gunmen were involved in the kidnapping, and that seven other passengers on the bus were not targeted.

Charbel said he had spoken with Turkey’s ambassador to Lebanon and that an investigation was under way, including questioning the bus driver.

In the wake of the incident, Lebanese soldiers deployed in the area, with two armoured personnel carriers stationed by the roadside where the kidnapping took place.

In Turkey, the kidnapped men were named as pilot Murat Aktumer and his co-pilot Murat Agca.

Speaking to Turkish television, Ankara’s ambassador to Beirut Inan Ozyildiz said “the case is being followed closely” and that he was working with “Lebanese forces to free the two pilots”.

The abduction is believed to be related to the kidnap of nine Lebanese Shi’as in Syria in May 2012.

They were part of a group of Shi’a pilgrims and went missing in northern Syria’s Aleppo province as they returned from a pilgrimage in Iran.

The women in the group and two men were released, but nine men are still missing.

Their kidnap was claimed by a man who identified himself as Abu Ibrahim and said he was a member of the rebel Free Syrian Army, but the FSA denies any involvement.

The families of those kidnapped have staged protests outside Turkish Airlines offices in Beirut, arguing that Ankara — a strong backer of the Syria rebels — should use its influence to secure the release of their relatives.

There have been several failed rounds of negotiations to free the pilgrims.

The kidnappers have not spelled out any demands, although they have claimed that the hostages were members of Hezbollah, the powerful Lebanese Shi’a party that is fighting alongside Syrian President Bashar al-Assad’s forces.

A representative for the families of the kidnapped Lebanese in a statement denied any involvement in Friday’s abduction of the Turkish pilots.

The kidnapping is the latest incident in which the Syrian conflict has spilled over into neighbouring Lebanon.

More than two years of fighting between Syrian rebels and Assad’s government has sparked increased sectarian tension in Lebanon, particularly between Sunnis — who largely back the Sunni-led uprising — and Shi’as, who back the regime.

The fighting has also spilled over, with shells fired from inside Syria landing in Lebanon, and Syrian warplanes and helicopters targeting Lebanese areas near the frontier.