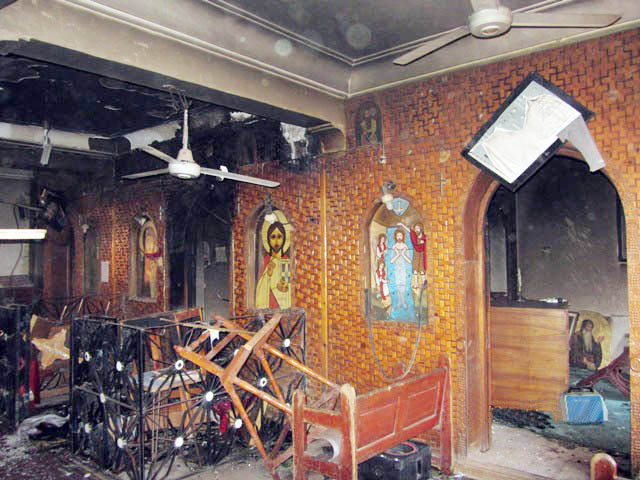 Thirteen people have been detained for 15 days pending investigations for alleged involvement in sectarian violence in the village of Diabiya in Beni Suef.

Violence in the Upper Egyptian village escalated after a fight between a Christian and Muslim over the former’s construction of a speed bump in front of his residence. The aftermath of the violence left 15 injured, with the village’s church burned and ransacked.

Thirty-five civil society organisations held the Muslim Brotherhood and Salafis responsible for the recent wave of attacks against Christians and criticised the security apparatus for its inaction in response to the ongoing strife.

The group highlighted attacks on Christians and churches in Minya, Assiut, Port Said, Al-Arish, Rafah, and Marsa Matrouh in a statement issued on Monday. The statement also pointed to impunity perpetrators enjoyed despite their looting and burning of Christian property.

The statement said that since the 1970s, the former regime had worked to fabricate religious tensions and ignite sectarian strife in a way to “consolidate power,” but pointed out that sectarian violence had escalated after its departure and had been reinvigorated following former president Mohamed Morsi’s ouster.

The organisations called for the protection of Egyptians and for the government to end campaigns of incitement against citizens, and advocated fortifying security around places of worship.

The statement also called for prosecuting perpetrators and instigators of violence, rather than resorting to “shameful” customary reconciliation meetings that often occur following attacks on churches and Christian homes.

“We condemn these criminal acts of the Muslim Brotherhood and Salafis who… disseminate hatred and religious and sectarian intolerance, and are working to create hotbeds of conflicts in different parts of Egypt in order to destabilise and weaken the state and divide it,”  said the statement.

The group also blamed the police for “complicity” in sectarian attacks, saying police reactions to such events were too slow and operated in a reactive manner, doing nothing while knowing that there was an “atmosphere of tension” leading up to attacks.

It also blamed European and US diplomats who had come to Egypt, alleging they demonstrated “bias” in order to preserve the blood of their Islamist “allies” in Rabaa Al-Adaweya and Nahda Square while ignoring attacks on Egyptian Christians and Shi’a Muslims.

“We warn of future terrorist attacks after the dispersal of Rabaa Al-Adaweua and Nahda Square,” said the group of civil society organisations.

The statement was signed by 36 civil society organisations, predominantly women’s rights groups. It was also signed by the Social Popular Democratic Alliance and 120 prominent public figures.

The Egyptian Organisation for Human Rights (EOHR) also expressed “deep concern” over violence in Beni Suef and called for “immediate intervention” to prevent bloodshed, and held the Egyptian government responsible for the protection of lives and the investigation of the unrest.

EOHR called on all political forces and civil society organisations to condemn incitement and hatred that provokes religious conflicts and on police forces to efficiently deal with those who violate the law.