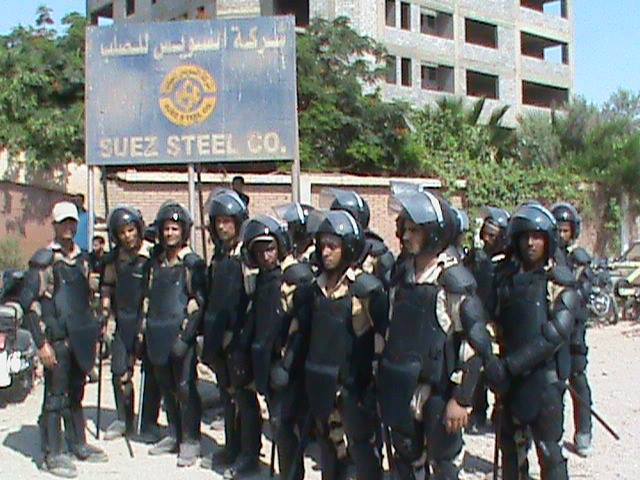 Haytham Mohamedein, Revolutionary Socialists movement member and lawyer, said the workers are accused of inciting workers to strike and violating other workers’ right to work.

While Mohamedein asserted that inciting workers to strike is not a crime, the punishment for the latter charge is between three and five years in prison.

Mohamedein noted that 15 workers have arrest warrants issued against them, including the two released today.

NGOs and political movements expressed anger with the army’s use of force at the Suez Steel Company workers’ sit-in, accusing the government and the army of “forgetting the demands of social justice,” in press statements issued on Monday and Tuesday.

Major Ahmed Shaaban, from the armed forces spokesman’s office denied claims of sit-in dispersion, saying the sit-in was not dispersed by army or police forces.

Mohamed Harby, a striking worker in the company, said the sit-in was not dispersed, but there were clashes with the army after the arrest of two co-workers.

He added that workers formed a delegation to meet Minister of Manpower and Immigration Kamal Abu Eita, to inform him of their problems, but denied reports that Abu Eita went to Suez to solve the issue.

Abu Eita urged all parties to use reason and engage in dialogue, as they are important ways to end labour problems, according to State-owned Al-Ahram.

Al-Ahram reported that Khaled Abu Bakr, the manager of the manpower and immigration directorate in Suez, said the army did not disperse the sit-in, but only interfered to save a worker after he set himself on fire. These claims were denied by Harby.

They also demanded the immediate release of arrested workers and called for an end to the army’s siege of the sit-in. The statement did not include any reference to the sit-ins dispersion.

Malek Adly, a lawyer and ECESR member said the sit-in was not dispersed, and that the Second Army in Suez is responsible for negotiations between workers and board members in Suez since 25 January 2011.

He added that what happened was a clash between army forces and workers because they wanted to block the Suez – Ain Sokhna Road.

Adly pitied Abu Eita, saying that his position as minister of manpower and immigration is useless, and asked for a legislative intervention to deal with problems.

The 6 April Youth Movement (Ahmed Maher front) condemned the sit-in dispersion and asserted the workers’ right to strike and sit-in, in a statement released early on Tuesday. They accused the interim government of having an unclear plan to fulfil the demands of social justice.

The Arab Network for Human Rights Information condemned “the continuation of the use of aggression by security forces against peaceful protests.” They added that the government does not try to find political and economic solutions for people’s problems. Instead it still relies on security solutions.

The Kefaya movement in Ismailia demanded the immediate accounting of those responsible for violence against the protesters.