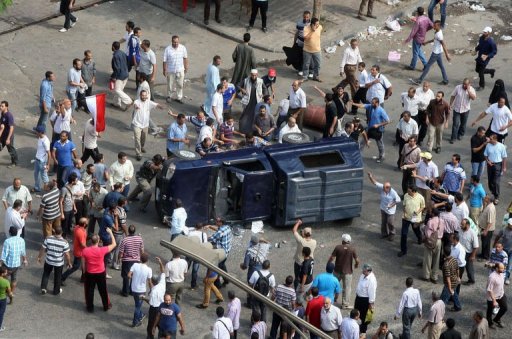 “I call on the security forces to exercise utmost restraint and on the interim government to end the state of emergency as soon as possible, to allow the resumption of normal life,” Ashton said in a sharpened statement following a dramatic day across Egypt.

Nearly 300 people including dozens of policemen were killed in the unrest after security forces moved in to disperse two protest camps set up by supporters of the ousted president, according to the government in Cairo.

“I strongly condemn the violence that has erupted in Cairo and throughout Egypt,” Ashton said, extending her condolences to victims that included a cameraman with Sky News.

She was quick to criticise all sides, noting: “I also condemn the attacks on churches and offices that have taken place in the course of what has been a violent day, leaving the country in a state of emergency and heading into an uncertain future.”

That was a reference to reports that Muslim Brotherhood supporters of Morsi had stoked the flames with attacks on the Coptic Church backing the military-led, interim governmental regime behind the security emergency.

Ashton stepped up her rhetoric amid global outrage at a crackdown deemed a “massacre” by some as the United Nations, the United States, Britain, France, Iran and Turkey denounced the use of force by the military-backed interim regime.

She said Egypt should have and could yet enjoy a different future “if all sides embark on a political process that will restore democratic structures through elections and allows for the peaceful participation of all political forces.”

She underlined, of the fast-moving events: “Today’s violence, the declaration of the state of emergency, and the decision by Vice-President Mohammed El-Baradei to resign will not create the right environment for this to happen.

“Only a concerted effort by all Egyptians and the international community might lead the country back on a path to inclusive democracy, and overcome Egypt’s challenges.”

Concern in Brussels — a major strategic economic partner and donor — had already seen the head of the European Parliament, Martin Schulz, call on the authorities “to ensure that all Egyptian people, regardless of their political views, are allowed to demonstrate peacefully.

“It’s the government’s responsibility to find a peaceful and fair solution to the current crisis towards an inclusive political process and reconciliation,” he said.

US Secretary of State John Kerry, for his part, urged Egypt’s military to allow elections so as to stabilise the country.

In Cairo, the interim prime minister Hazem al-Beblawi praised police for their “self-restraint” and said the country remains committed to an army-drafted roadmap which calls for elections in 2014.