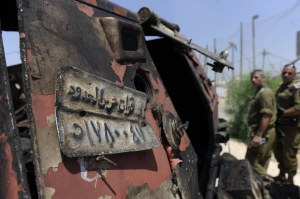 The source cited an investigation committee which reported that locally made IEDs exploded outside the prosecutor’s office, injuring one soldier.

Eyewitnesses said a citizen also sustained injuries as a result of the blasts while standing near the office’s gate.

Unknown assailants were also reported to have fired upon bystanders after the blasts and fled after exchanging fire with security forces.

An Apache helicopter circled the area after the blasts to pursue the assailants.

Militants were also reported to be seen placing IEDs near the wall of a lounge area near another Al-Arish police station in the Gharnata region; blasts were later reported, but no casualties resulted from the attack, although a large portion of the wall was destroyed.

The blasts were coordinated with the launching of missiles on yet another police station in Al-Arish. The missiles fell in the area around the station, with no casualties reported.