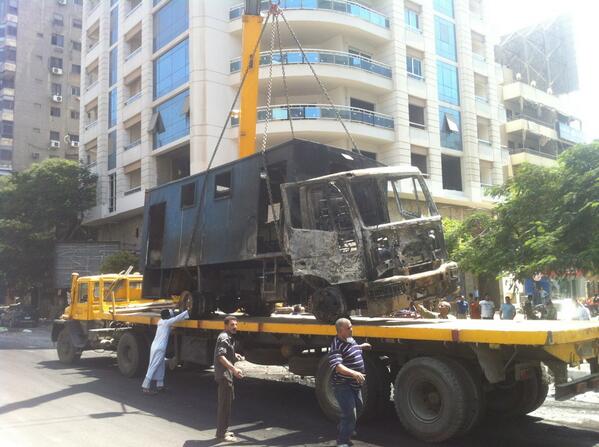 Local residents and contractors have begun to clear the hastily erected barricades and take stock of the damage caused by clashes in Mohandessin on Wednesday following the clearing of pro-Mohamed Morsi sit-ins.

Relative calm has returned to the streets of Mohandessin following Wednesday’s outbreak of violence; JCBs loaded dump-trucks with rubble as a crane lifted the shell of a burnt-out police vehicle onto a flatbed truck, whilst local shopkeepers swept shattered glass from the pavement along Batal Ahmed Abdel Aziz Street. Military personnel in armoured personnel carriers kept watch at the ends of Gamat El-Dowel Street as normal life began to return to the neighbourhood.

A small pocket of supporters of the ousted president remained on the grassy area in front of Mostafa Mahmoud mosque, watching the clean-up operation. One of the men, who hailed from the Boulaq neighbourhood said the police had been “acting under the orders of Israel” in Wednesday’s violence. He also claimed he saw “hundreds” of wounded, dead and dying in the Mostafa Mahmoud mosque, which he said served as a makeshift triage centre during the violence.

When he was asked about his outlook for the future, he said: “It looks as though the police will not stop killing, because we will not stop.”

On a side street off Gamat El-Dowel, a gun store burnt out after the clashes was surrounded by locals surveying the damage. One resident claimed that pro-Morsi demonstrators had attempted to break in to the store in order to steal the weapons and ammunition inside. The shutters of the shop were lowered at the time of the attack, he said, and so the looters threw molotov cocktails, igniting the owner’s truck which was parked outside.

The looters’ petrol bombs ignited the inside of the shop before they were able to enter, he said, adding that they had been unable to reach the weapons before the blaze took hold. “No weapons or missiles [ammunition] were stolen,” he said. Hundreds of shotgun shells, some of them still packaged in charred cardboard boxes lay inside the shop, the plastic casings melted and warped from the blaze.

The shutters lay crumpled in front of the store, peppered with hundreds of small holes, from birdshot fired by the looters, the resident claimed. The holes may have been caused by shotgun shells self-discharging from the fire, however.

Another local resident, a medical doctor named Dr Osama, added that pro-Morsi supporters had attempted to break into the CIB bank on Gamat El-Dowel Street at around 10pm Wednesday, in defiance of the curfew, but were confronted by local residents, who fired birdshot at the advancing march. “We are here to protect our place, because this is our country,” Dr Osama said.

“We used birdshot, which is legalised, and we have the legalisation in order to use it,” he added. He said the would-be looters “did not fire weapons back, but ran away.”

The military arrived at around 11pm, he said, which provided further impetus for the demonstrators to flee.

A number of other vehicles peppered with bullet holes lay in various states of disrepair in the area surrounding the clashes, with local residents and onlookers all trying to survey the cost of the damage caused by Wednesday’s violence.