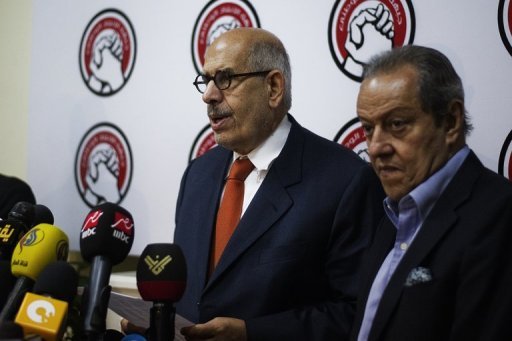 Al-Dostour Party condemned what it called a smear campaign targeting its founder Mohamed ElBaradei over his resignation from the post of Vice-President for Foreign Affairs.

“This smear campaign does not only target ElBaradei, but also the gains made by the January 25 Revolution,” according to an official statement released by the party on Friday.

The statement partly attributed the attacks on ElBaradei to remnants of the Mubarak regime, which the party accuses of taking advantage of the 30 June uprising.

It emphasised that ElBaradei’s decision to resign from his post was taken on a personal level and not in relation to the party.

Although ElBaradei has yet to make an official statement clarifying his position, it is believed that he resigned in disapproval of the security crackdown on the two pro-Mohamed Morsi sit-ins on Wednesday.

The dispersal of the Rabaa Al-Adaweya and Al-Nahda Square sit-ins sparked violence across Cairo and other cities that took the lives of over 600 and wounded nearly 4,000, according to official numbers from the health ministry.

“We do not doubt that ElBaradei will come out to the public at an appropriate time to clarify the reasons behind his resignation,” the Al-Dostour Party’s statement read.

The controversy surrounding his resignation has provoked a wave of criticism from politicians and the public toward the former vice-president.

On Thursday, Deputy Prime Minister Hossam Eissa said in an interview on the Dream Channel that ElBaradei had agreed to the dispersal of the sit-ins in a cabinet meeting. He added that the former vice-president personally called Prime Minister Hazem El-Beblawi to express his support for the operation after he was briefed on the anticipated number of casualties.

“At a time when the state moved to protect its institutions, ElBaradei resigns over the use of force, as though the burning of seven churches, 23 police stations, several security directorates and the Ministry of Finance were not criminal acts. ElBaradei does not see all of this,” Eissa said.

Khaled Dawood, the spokesperson to the National Salvation Front (NSF), which El-Baradei lead prior to taking up the position of vice-president, resigned from his post on Friday in objection to the support of several front parties to the security crackdown on pro-Morsi protesters.

“I could not handle speaking for the majority of the front’s parties which explicitly decided to support the military crackdown on the Muslim Brotherhood,” he stated in his resignation letter, condemning what he called “serious violations” by security forces during Wednesday’s clashes.