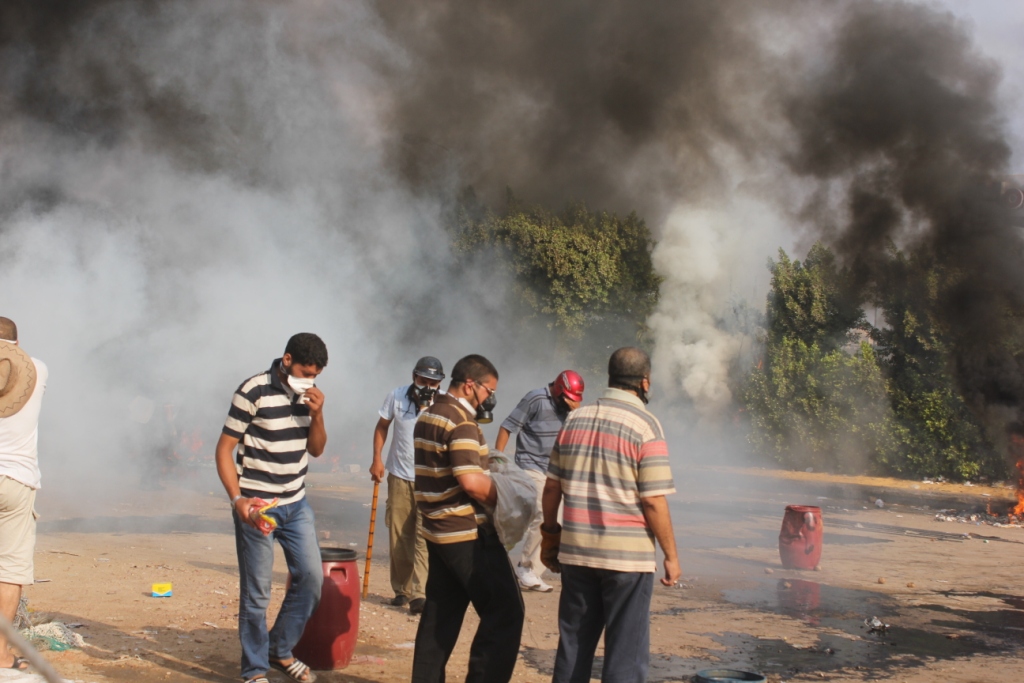 Human rights organisations condemned the excessive use of violence practiced by security forces in the dispersal of the sit-ins in support of ousted president Mohamed Morsi.

At least 638 civilians were killed after security forces forcibly dispersed the pro-Morsi Rabaa Al-Adaweya sit-in in Cairo and Al-Nahda sit-in in Giza on Wednesday.

In a joint statement released on Thursday, the organisations stated that this “humanitarian tragedy” could have been avoided if international rules and standards were followed during the sit-ins’ dispersal.

The signatory organisations said the sit-ins’ dispersal saw the largest number of casualties to die in a few hours within a political assembly since 28 January 2011.

The dispersal also threatened the lives of thousands for months, and possibly even years, to come due to the rising possibility of terrorist crimes, they added.

“The criminal and violent acts committed by some pro-Morsi protesters and their leaders and their possession of arms does not justify collectively punishing all protesters,” the statement read, citing international standards in the freedom of peaceful assembly. “It also doesn’t justify the excessive use of force practiced during the sit-ins’ dispersal.”

The organisations criticised the lax security performance and the lack of legal measures taken to preserve general security and especially the security of residents around the sit-ins.

Such lax performance, the statement read, allowed the entrance of weapons into the sit-ins and the proliferation of killing, torture and physical assault on journalists without accountability.

The signatory organisations also condemned the state’s decision makers for failing to take into account expected acts of violence and vengeance by the Muslim Brotherhood and its supporters following the sit-ins’ dispersal.

“The policies and practices adopted by the authorities towards both sit-ins since Morsi’s ouster on 3 July and until their dispersal reflect utter failure in applying the laws and respecting citizens’ rights, the right to life and the right to safety,” the statement read.

The organisations also strongly condemned the Brotherhood and its supporters for “terrorising” citizens in the capital and in other governorates by attempting to break into several governmental institutions and police stations. They also condemned the attacks on and the torching of churches in Upper Egypt and Sinai, as well as threatening Coptic citizens and exercising physical violence against them.

The organisations condemned the Brotherhood for failing to address crimes of sectarian violence, accusing it of inciting the violence from the Rabaa sit-in’s platform at times.

“The Brotherhood adopted political violence and terrorism for a long time to come instead of exercising self-criticism and admitting its failure to preserve the confidence of citizens who voted for it in elections,” the statement read, adding that the Brotherhood’s practices are pushing the country towards a civil war.

The organisations expressed their fear that the widening scope of terrorism and the looming threat of civil war might lead the authorities to take other extreme measures to preserve citizens’ lives. Interim president Adly Mansour already announced a state of emergency and issued a nighttime curfew following deadly clashes on Wednesday.

“The state should immediately put a serious plan to control the violence and restore the political track abducted by security solutions both in the capital and in Sinai,” the statement read.

The signatory organisations called for independent investigation and the trials of all those complicit in the killing of citizens since 3 July as well as the questioning of Brotherhood leaders and affiliates complicit to inciting hatred, religious strife, violence, torture, killing and attacks on journalists.

They called for revealing the reason behind such a large death toll during the sit-ins dispersal and for the burning of tens of victims’ bodies during the storming of the sit-ins.