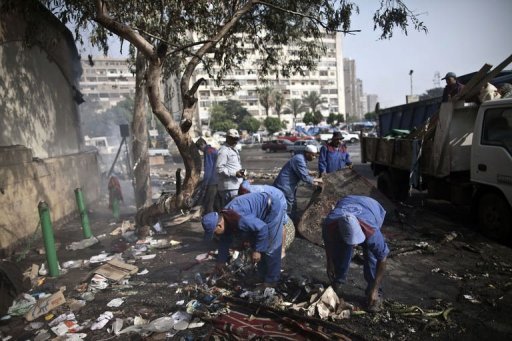 The United National Security Council (UNSC) called for an end to the violence that followed Wednesday’s security crackdown on protests in support of ousted president Mohammed Morsi.

“The view of council members is that it is important to end violence in Egypt and that the parties exercise maximum restraint,” Argentine UN Ambassador Maria Cristina Perceval, the current UNSC president, said on behalf of the 15-member council. “There was a common desire on the need to stop violence and to advance national reconciliation.”

The council met on Thursday at 21:30 GMT for an emergency meeting to discuss the situation in Egypt, where UN Deputy Secretary-General Jan Eliasson briefed members on the recent clashes behind closed doors.

The meeting was jointly requested by France, Britain and Australia, and comes a day after police dispersed the pro-Morsi Rabaa Al-Adaweya and Al-Nahda sit-ins, leaving over 500 dead and thousands injured.

It is unlikely that the Security Council will take any action in the future, with Russia and China traditionally opposing foreign involvement in a country’s domestic affairs. Outside of the Security Council, countries have already taken steps in response to the violence in Egypt.

U.S. President Barack Obama announced on Thursday that the U.S. would cancel its biannual joint military exercises with Egypt, scheduled for next month, saying that they cannot continue to cooperate with the armed forces in light of its crackdown on protesters.

The foreign ministries of Great Britain, Frances, Spain and Germany summoned, while Ecuador recalled, the Egyptian ambassadors in their countries following Wednesday’s clashes.