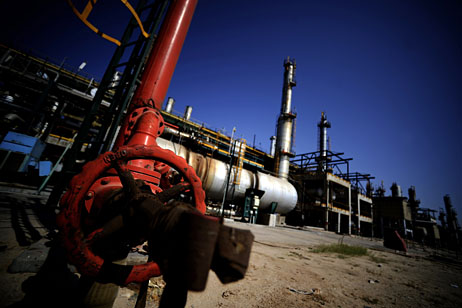 AFP — Libya is threatening to use military force to bring order to its oil sector, where a strike by guards has dealt a heavy blow to its fragile post-revolution economy.

Oil exports plunged by more than 70% at the end of July after guards, including rebels who helped topple dictator Muammar Gaddafi two years ago, forced terminals to shut.

The strike – now in its third week – came after protests first emerged in June and has virtually stopped production and exports at key terminals in Ras Lanuf, Sedra, Brega and Zoueitina on the central coast.

For weeks the guards have been accusing Prime Minister Ali Zeidan and Oil Minister Abdelbari al-Aroussi of awarding export contracts illegally, in violation of procedures by the National Oil Co.

The NOC insisted there has been no wrongdoing but Zeidan said an agreement was reached to probe the claims made by the guards.

The prime minister also accused the guards of trying to make shipments for “their own profit” and threatened military strikes against any unauthorised vessel that docks.

“A group of guards at oil terminals in the central region has decided to bring vessels they have organised themselves to export oil for their own profit,” Zeidan charged late Thursday.

“Any vessel not under contract to the National Oil Co that approaches the terminals will be bombed from the air and the sea,” he warned.

Armed guards in charge of protecting Libya’s vital oil industry were formed by the defence ministry after the fall of Kadhafi, and include rebels who helped topple him.

Since the 2011 uprising, Libya’s new rulers have been caught in a tug-of-war with these former militiamen, who have no qualms about using weapons when they believe their interests are at stake.

The strike has dealt a blow to production, with production falling from 1.5m barrels of oil per day to 500,000 bpd.

Libya is almost entirely dependent on oil and gas for its foreign exchange earnings, with hydrocarbons accounting for more than 80% of its GNP and up to 97% of its exports.

Before the 2011 uprising, production reached 1.6 million bpd. It dropped to almost nothing during the fighting.

But within a few months after the overthrow of the Gaddafi regime in October 2011, production had nearly returned to its pre-uprising level.

The strike has cost the North African nation $1.6bnn in lost export revenues since 25 July, the oil minister said.

“If the trouble continues, the government will not be able to honour its engagements or pay salaries,” he warned.

His deputy, Omar Chakmak, said losses in the first seven months of the year had totalled $2bn.

Zeidan warned that the government could not allow the loss of exports to go on indefinitely.

“If the blockade of the oil terminals continues, the state will be obliged to use all means at its disposal, including those of the army,” he warned.

“Some customers are turning away from Libya to other producers for their supplies,” he said.

Oil prices rose this week on several concerns, including the strike in Libya and fears that violence in neighbouring Egypt could disrupt shipments through the Suez Canal.