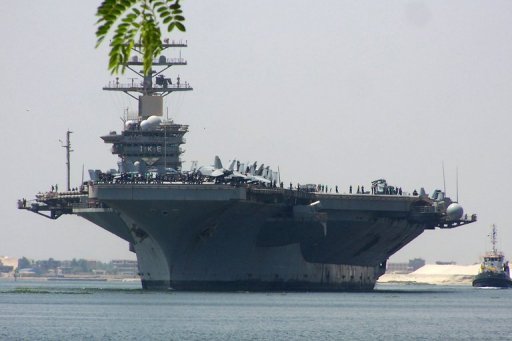 AFP – A US aircraft carrier and accompanying warships have passed through the Suez Canal en route to the Arabian Sea despite strains in US-Egypt relations, the Navy said Monday.

The USS Harry Truman, along with two guided-missile destroyers and two cruisers, transited the strategic canal on Sunday without incident for a mission designed to promote “stability” in the region and provide air support for NATO-led forces in Afghanistan, the Navy said in a statement.

“We’ve trained hard and we’re ready to operate alongside our coalition partners to conduct maritime security operations to ensure stability and build trust and confidence throughout the region,” Rear Admiral Kevin Sweeney, commander of the Truman strike group, said in the statement.

The US carrier moved through the canal at a tumultuous moment in Egypt as military rulers have unleashed a brutal crackdown against street protesters. Nearly 800 people have been killed in the unrest.

The violence has caused tensions between Cairo and Washington, with US officials frustrated after their repeated appeals not to use lethal force were ignored.

Despite the bloodshed in Egypt, the United States has not cut off $1.3 billion in annual military aid but last week, President Barack Obama announced the cancellation of a major joint exercise, Bright Star, which is normally held every two years.

The Truman replaces the carrier USS Nimitz in the Gulf region, as part of the Pentagon’s policy to keep one carrier in the area year-round.

At nearly 200 kilometers (125 miles) long, the Suez canal is a vital link between the Mediterranean and the Red Sea for US forces.

About 35 to 45 US naval ships, including aircraft carriers, pass through the canal every year, according to the US Fifth Fleet.

Owned by Egypt, the canal is governed by an international treaty that guarantees free navigation. The US military enjoys special privileges due to its long-running alliance with Egypt, allowing American naval ships to jump the queue of vessels to transit the canal.

The canal also carries special importance as the United States withdraws tens of thousands of troops and vast amounts of equipment from Afghanistan through the end of 2014.

With Pakistan now allowing NATO to use border crossings with Afghanistan, a large portion of weapons and equipment will be loaded onto ships at Pakistani ports and ferried by sea back to the United States, via the Suez Canal.

Without access to the canal, the draw down would be much more costly.