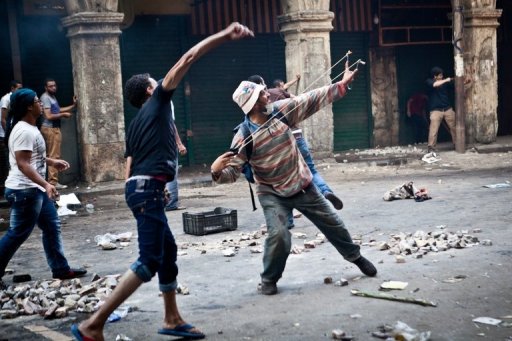 Two were killed and at least eight were injured in Sharqeya, where anonymous militants attacked a security checkpoint on a road leading to Zagazig, the governorate’s capital. The attack resulted in the death of one policeman and injured eight conscripts.

One of the militants was shot dead and another was arrested, and was in possession of firearms, live ammunition and an Al-Qaeda flag, said General Hany Abdel Latif, spokesman for the Ministry of Interior.

Clashes in Qaliubiya left one dead and at least one injured. Pro-Morsi supporters organised a march of at least 300 people in the village of Al-Gabal Al-Asfar, which resulted in clashes between the protesters and residents. Stones, sticks and firearms were used by both sides. Security forces seized control of the situation, according to state-owned news agency MENA.

In Alexandria, state-owned Al-Ahram reported that pro-Morsi supporters organised a march to Moharram Bek police station during curfew hours, with the intention of breaking in. Residents of the area clashed with the marchers, causing its dispersal and the arrest of several pro-Morsi supporters by police forces. No deaths or injuries were reported.

Reports from Suez said three army checkpoints to the east of Ahmed Hamdy tunnel were attacked, causing eight injuries. The army spokesman’s office denied these reports and said that no attacks occurred on army checkpoints in Suez in the past two days.

The wave of violence follows the forced dispersal of pro-Morsi sit-ins near Rabaa Al Adaweya Mosque and in Al-Nahda square on Wednesday.