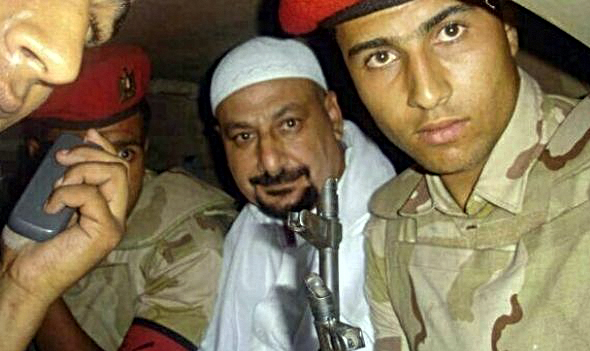 Hegazy disappeared following the dispersal of the Rabaa Al-Adaweya sit-in in Cairo a week ago. The sit-in, set up by supporters of ousted president Mohamed Morsi on 28 June, harboured Hegazy for over a month and thus prevented security forces from arresting him despite outstanding warrants for his arrest.

Hegazy was arrested at the north-western Siwa-Matruh road, kilometre 39, said a source within the Ministry of Interior who preferred to remain anonymous. He added that Hegazy was attempting to flee the country, headed to Libya. The preacher shaved off his white beard and replaced it with a dark, dyed goatee as a form of disguise.

Hegazy is accused of inciting violence and killing through speeches he delivered from Rabaa’s platform. In one speech given on 21 June during a pro-Morsi protest, Hegazy said: “whoever sprays Morsi with water will be sprayed with blood.”

Ali’s name was on the airport’s travel-ban list according to a decision by the Prosecutor General, the Ministry of Interior source said. He was referred to investigation following his arrest.

The 6 April Youth movement, led by Ahmed Maher, commented on Hegazy’s arrest, describing him as a “sponsor of strife and blood” in a statement released on Wednesday. The movement said that Hegazy’s words “caused abundant blood spilling,” adding that his arrest should make him comprehend the true value of his words and the consequences of inciting “war, killing and strife.”

“Now all your supporters know that not all that shines is truly golden,” the statement read. “Now they know that only the empty pots make the loudest noises.”

The movement stated that Hegazy, who they accused of inciting violence, should have been at the forefront of the battle, and not a fugitive in disguise.

Hegazy was a member of the National Council for Human Rights (NCHR), appointed by the now dissolved Shura Council in September 2012. His appointment stirred controversy, and following Morsi’s ouster, the criticism against Hegazy’s membership in the council mounted amid controversial statements he released. Interim president Adly Mansour ratified on 6 August a cabinet bill which ordered the restructuring of the council.

Hegazy was also a member of the January 25th Revolution’s board of trustees, established after the ouster of President Hosni Mubarak.