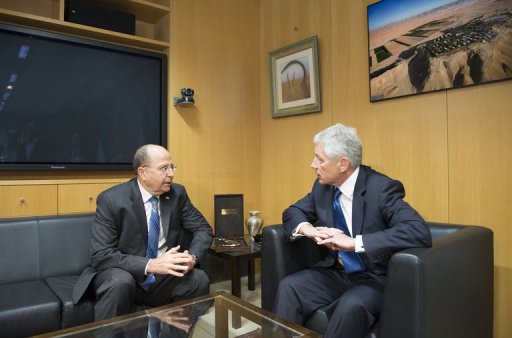 AFP – US defense chief Chuck Hagel spoke with his Israeli counterpart Moshe Yaalon on Wednesday about Egypt, Iran and the ongoing violence in Syria, including claims of a chemical weapons attack.

In a brief statement after the morning call, the Pentagon said the two men “agreed to continue to maintain intensive dialogue on the multitude of challenges facing” their two countries.

Washington has demanded “immediate access” for United Nations inspectors to the site of an alleged chemical weapons attack by government forces on civilians in Syria.

Syria’s main opposition group earlier accused the government of “massacring” more than 1,300 people in chemical weapons attacks near Damascus on Wednesday, saying many of the victims choked to death.

The UN team is in Syria to probe previous allegations of chemical weapons strikes leveled against both sides during the 29-month conflict.

Washington concluded in June that President Bashar al-Assad’s forces had indeed used chemical arms in the past, including the nerve gas sarin, in attacks that killed up to 150 people.

In response, it promised to significantly toughen its stance on Syria and said it would provide military support to rebels for the first time.

But it has refused to specify exactly what it is doing because the information is classified, and much of the assistance is believed to have yet to reach selected opposition groups.

On Egypt, Washington is under pressure to cut its military aid to Cairo in the wake of a deadly army crackdown on supporters of deposed president Mohamed Morsi.

Israel has refrained from making public statements but an unnamed official was quoted in a media report earlier this week as saying that Israel and the West must support Egypt’s army.

Israel and Egypt, which in 1979 became the first Arab state to sign a peace treaty with the Jewish state, coordinate closely on military activity in the increasingly lawless Sinai Peninsula, which borders both the Jewish state and the Gaza Strip.