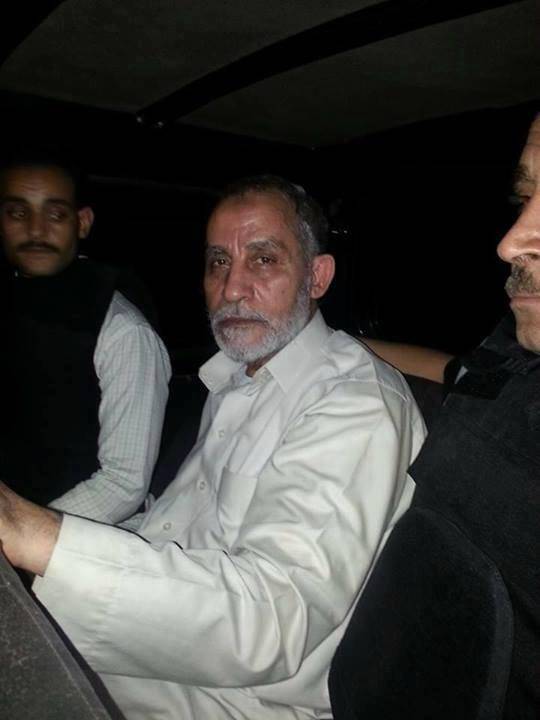 Security forces arrested a number of senior members of the Muslim Brotherhood into Thursday evening, continuing a campaign of arrests that has followed the dispersal of sit-ins at Rabaa Al-Adaweya and Nahda Square.

Hassan Al-Brens, former deputy governor of Alexandria, was arrested on Thursday evening in Nasr City, the same day the spokesman of the Muslim Brotherhood Ahmed Aref was detained by police.

The Freedom and Justice Party’s media advisor Mourad Ali was also arrested on Thursday on charges of belonging to a “banned group that aims to disturb the public peace and security and spread chaos,” according to state-owned Al-Ahram, which reported Ali was detained at Cairo International Airport when trying to depart on a plane heading to Rome.

Another 19 Brotherhood members were arrested on Thursday, according to state-owned Al-Ahram, including Fathi Shehab, former MP Ahmed Abu Baraka, and Mostafa Ghoneim.

The Front of Defence for Protesters in Egypt posted a list of 1,901 names of people arrested since 14 August.

Earlier this week, Muslim Brotherhood lawyer Ali Kamal accused those who backed the change of power that unseated Morsi as seeking to “settle accounts” by arresting Supreme Guide of the group Mohamed Badie and other senior members.

“It is well-known that all the charges brought against the leaders of the Muslim Brotherhood and…the Freedom and Justice Party…are implausible fabricated charges with no legally acceptable evidence,” he said on the group’s website.

Prominent supporter of the Muslim Brotherhood Safwat Hegazy was arrested early Wednesday morning near Marsa Matrouh. The Ministry of Interior said it apprehended Hegazy, who had changed his appearance, as he attempted to cross into Libya through Egypt’s western border. He was accused of inciting violence and killing.