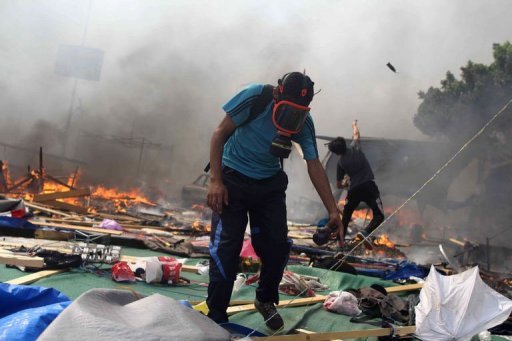 Sixty-seven percent of Egyptians were “satisfied” by the manner of dispersal of sit-ins at Rabaa Al-Adaweya and Nahda Square, according to a poll released by Baseera.

The report showed 24% of respondents were “not satisfied” with the way in which dispersals were handled, leaving 9% “not sure.”

The figures closely mirrored respondents’ opinions on the use of force to empty the sit-ins, with 65% saying there was “not excessive use of violence”, with 23 % saying that security forces used “too much force” to disperse the protests.

Despite this, 56% of those surveyed said the death toll for the dispersal was too high, with a remaining 34% saying it was not.

Seventy percent of respondents said the protesters supporting ousted president Mohamed Morsi were given sufficient time to end their demonstrations, with 24% saying they could have been given more time amidst the political impasse.

The report showed most Egyptians were not supportive of actions taking by other countries against Egypt, following the dispersals with 78% saying countries that objected to the dispersal carried out by security forces had no business doing so and only 8 % saying international responses were warranted.

Thirty-nine percent of respondents said that Egypt’s dealing with those countries critical of actions taken was “good,” with 32% saying it was “average” and 10% saying “bad.”