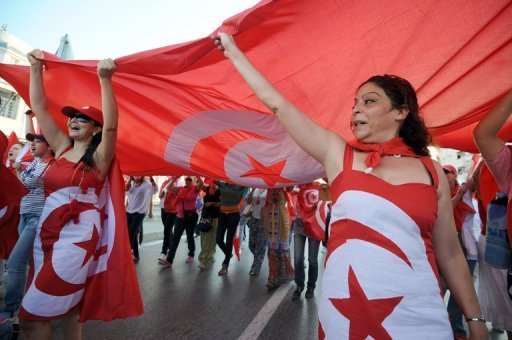 AFP – Tunisia’s opposition coalition on Friday rejected proposals by the ruling Islamists for ending a month-long political crisis, saying its offer to enter talks on a government of technocrats was insufficient.

“All negotiations without the dissolution of the government are a waste of time,” said Taieb Baccouche, a representative of the National Salvation Front.

He was speaking after meeting members of the UGTT trade union confederation, which has been mediating between the two sides and which forwarded the ruling Ennahda party’s proposals.

Tunisia’s ruling Islamists said Thursday that they are ready to negotiate with the opposition on the formation of an apolitical government, raising hopes of an end to a month-long crisis.

But Ennahda ruled out any prospect of the cabinet that it heads resigning imminently, calling first for a “national dialogue” bringing together supporters and opponents of the ruling coalition.

“Ennahda announces that it has accepted the initiative of the UGTT union as the starting point for a national dialogue to get the country out of the crisis,” the party said in a statement.

The powerful trade union confederation, which is mediating between the rival factions, has proposed replacing the existing administration with a non-partisan government.

“The government will not resign and will continue its mission until the national dialogue produces a compromise solution that guarantees the democratic transition and the organisation of free and fair elections,” Ennahda added.

But for the first the Islamists no longer appear to exclude the possible departure of the cabinet led by Prime Minister Ali Larayedh, signifying a softening in their position.

The UGTT said the Islamists had made an important concession.

“We know that there are some difficulties, but the red lines laid down by Ennahda have been lifted,” said Sami Tahri, a union representative.

The shift came as Ennahda’s leader, Rachid Ghannouchi, met the UGTT’s secretary general Houcine Abassi, and nearly one month after the assassination of the opposition MP Mohamed Brahmi.

It was the second attack of its kind in six months, and plunged the country into a fresh political crisis, sparking mass protests and calls for the Islamist-led government’s ouster.

Abassi said that Ennahda had “accepted the initiative of the UGTT as the basis for the start of a national dialogue” to end the political impasse.

In addition to the formation of a new government, the UGTT had proposed keeping the national assembly in place and adhering to a strict timetable for adopting a new constitution and holding fresh elections.

The Ennahada group in the National Constituent Assembly said it had reached agreement with five smaller factions on changes to a draft charter to address criticisms by secular groups.

A clause that would have blocked any future amendment to the constitution that affected “Islam as the state religion” has now been dropped.

The NSF has repeatedly ruled out talks with Ennahda while the Islamist-led government remains in power, insisting on a new administration composed of independents.

It and has called for nationwide anti-government demonstrations, starting on Saturday evening.

Activists and opposition MPs have gathered regularly outside parliament over the past month, with two protests, on August 6 and 13, drawing tens of thousands of people.

But the protests have been largely peaceful, except for some clashes at the end of July, and Islamist Prime Minister Ali Larayedh warned this week that any attacks on state institutions would not be tolerated.

The UGTT, which boasts some 500,000 members and is capable of bringing the country to a standstill, has been central to the negotiations, shuttling between the Islamists and the opposition in a bid to break the deadlock.

The opposition accuses Ennahda of mismanaging the economy and failing to improve living standards.

The criticism is similar to that levelled against Egypt’s Islamist president Mohamed Morsi by millions of protesters who took to the streets before the army overthrew him on July 3.

Ennahda has also been accused of being too soft on radical Islamists, who are blamed for murdering Brahmi and Chokri Belaid, another prominent secular politician whose assassination in February brought down the first Ennahda-led government.

Senior Ennahda members have, for their part, accused the opposition of trying to mirror events in Egypt, saying that their demands amounted to an attempt to engineer a “coup” like the one that ousted Morsi.