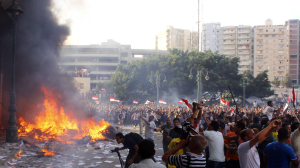 Prime Minister Hazem El-Beblawi issued on Thursday a decision to reshuffle the council, producing a list of new council members.

El-Beblawi appointed former Minister of Information Mohamed Fayek as council chairman. Fayek had served as the council’s deputy chairman in its first formation, as well as chairman of the Arab Organisation for Human Rights.

Abdel Ghaffar Shokr, chairman of the Social Popular Alliance Party, was appointed as NCHR deputy chairman. Shokr occupied the same position within the NCHR’s previous formation, appointed by the now dissolved Shura Council in September 2012. He nevertheless resigned from the council in protest over its reaction to the constitutional declaration former president Mohamed Morsi released in 2012, which granted the latter sweeping powers.

Former leading figure of Al-Jamaa Al-Islamiya Nageh Ibrahim was also appointed as an NCHR member, however Ibrahim turned down the post, telling independent satellite channel Al-Hayah he had taken a vow never to participate in politics.

Shokr stated that the new reshuffle produces a much better council than the reshuffle done in 2012. He stated that the latter included a large number of Brotherhood members and Salafis who were not related to human rights, whereas more than half the new formation’s members come from a human rights background.

“This formation adheres to the Paris Principles,” Shokr said, in reference to the 1993 Paris Principles which relate to the status and functioning of national human rights institutions.

NCHR former deputy chairman Mohamed Al-Damaty earlier criticised the decision to reshuffle the council, saying that according to the Paris Principles, the council members’ appointment should be done by a legislative body and not an executive one. Shokr stated that due to the lack of a legislative body, the president is the legislative authority and he’s entitled to mandate the prime minister to appoint the council members. Shokr added that the current council’s mandate expires with the election of a new House of Representatives.

The NCHR’s top priority would be to look into reports issued by the council’s technical secretariat about the violence which took place since Morsi’s ouster on 3 July, Shokr said. The council would then issue a comprehensive report about the acts of violence and another report about the dispersal of the pro-Morsi Rabaa Al-Adaweya and Al-Nahda sit-ins.

“One of our biggest challenges is to open communication channels with international human rights organisations,” Shokr said, especially referring to the United Nation’s High Commissioner for Human Rights. He added that the commissioner lacked “a correct idea of what’s happening in Egypt”.

Mohamed Zare’, head of the Arab Penal Reform Organisation and resigning NCHR member, described the latest council formation as the best since the council’s establishment.

“This is the first time for the majority of council members to come from a human rights background,” Zare’ said. He added that the council members’ political background is diverse; they represent Islamist, leftist and liberal political movements.

“Yet, the formation of the council is only half its success,” Zare’ said. “The other half depends on the degree of the state’s interaction with the council. The state must allow and help the council properly perform its job.”

A group of independent personalities nevertheless criticised the council’s formation and announced they will form a shadow NCHR instead. Esmat Al-Marghani, chairman of Bint Misr (Egypt’s Daughter) Association and member of the shadow council, said the latest reshuffle is farthest as could be from human rights.

“Most of the new members are affiliated with regime,” Al-Marghani said. “Most of the organisations the members belong to depend on foreign funding, especially from the United States.”

Al-Marghani said the shadow council would “transparently” report on human rights violations and raise those reports to the NCHR.

Shokr welcomed the idea of a shadow NCHR, adding that any reports they produce could be useful for the original council.

Misr Al-Qawia (Strong Egypt) Party said in a statement released on Friday that it has certain reservations regarding the reshuffle, adding that some new council members belong to political parties and that political activities should not mix with human rights activities. The party added that a huge responsibility lies on the NCHR in regards to preserving Egyptians’ dignity and fighting for the gains of the January 25 Revolution.

Interim president Adly Mansour ratified a bill drafted last month by the cabinet ordering the restructuring of the NCHR.

Workers at the NCHR’s general secretariat disclaimed the current council members and have been calling for the council’s restructure since Morsi’s ouster.