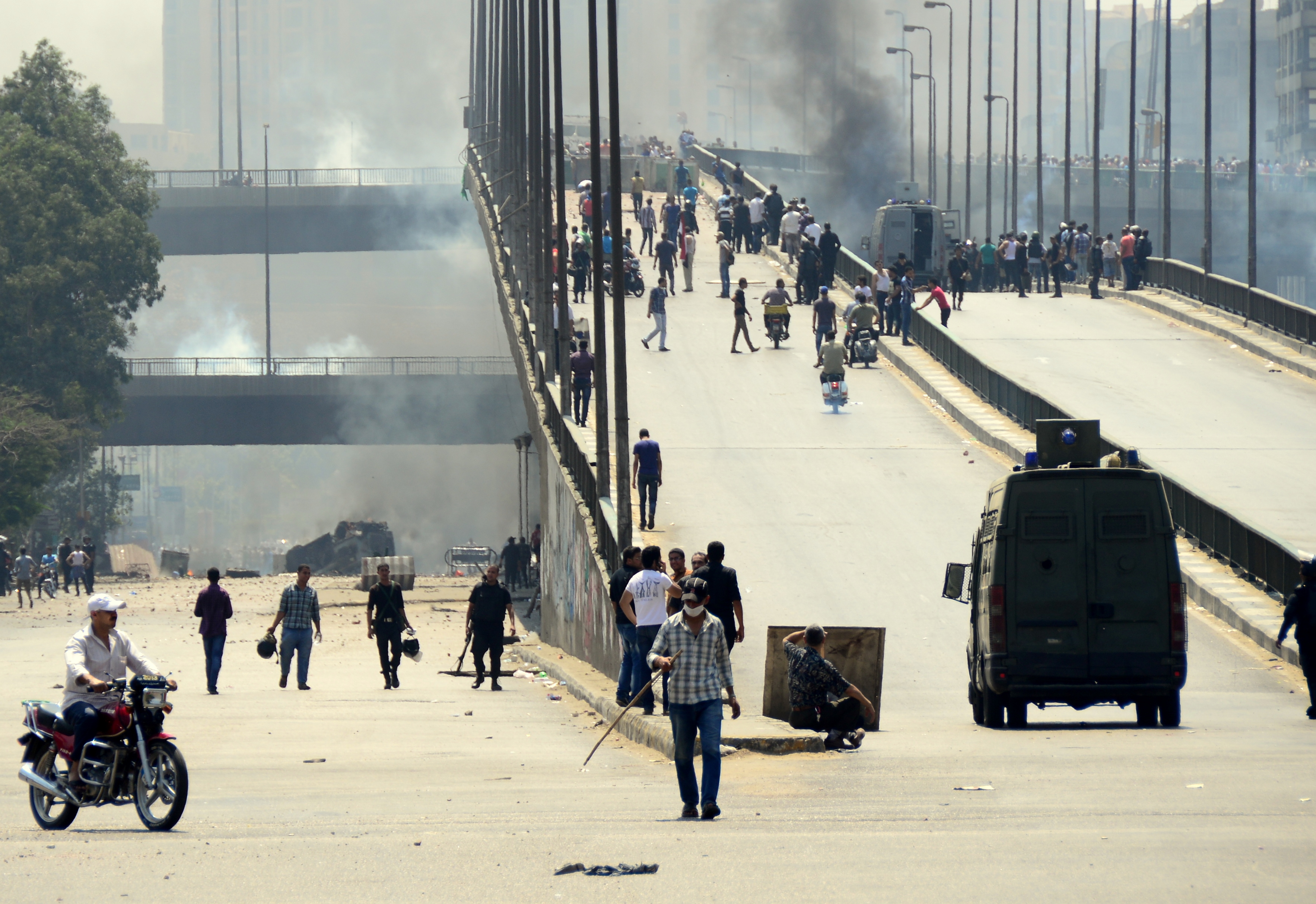 Egypt’s police and armed forces were fully committed to international human rights standards during the 14 August break up sit-ins at Rabaa Al-Adaweya and Al-Nahda Square, according to a report published by Ibn Khaldun Center for Development Studies on Thursday. According to the Ibn Khaldun Center, a Cairo-based research centre focusing on human rights, the sit-ins had become home to terrorists as well as “weapons stashes” and “dens of torture.”  The report cited 44 cases of torture, including 22 cases of fatal torture, and failed negotiations as reasons for the Ministry of Interior to act. The report outlined six progressive steps taken by the Egyptian government and the Ministry of Interior to disperse the sit-ins. These steps, it argues, fall in line with both the International Covenant on Civil and Political Rights and the United Nation’s Code of Conduct for Law Enforcement officials.  Both of these international agreements recognise the right for peaceful protest, but condone forceful dispersal “if other means are ineffective,” and national security is in jeopardy. The report indicated that the police and government took steps to ensure the safe exit of protesters before more drastic steps were taken.  These steps included 41 days of negations involving both Egyptian leaders and international mediators.  When negotiations failed, low-flying aircraft with loudspeakers flew over the sit-ins giving verbal warnings for protesters to vacate. On the morning of the dispersal protesters were offered safe exit from the sit-ins, according to the Ibn Khaldun Center.  Protesters in Rabaa were free to leave via Al-Nasr Road, and protesters in Nahda could leave via Giza Square. At this point police used bulldozers to clear barricades and allow security forces to enter the sit-ins.  According to the report, police gradually escalated the operation, and only used non-lethal force: water cannons, tear gas and shotguns aimed to harm but not kill. The Center claims that protesters used machine guns and Molotov cocktails against security forces at the sit-ins, resulting in the deaths of police officers. The Ibn Khaldun Center directly contradicts a report by Human Rights Watch, the international human rights watchdog organisation, which said Egyptian police quickly resorted to lethal force against the “vast majority of protersters [who] were unarmed.” HRW described it as “the most serious incident of mass unlawful killings in modern Egyptian history.” The Ibn Khaldun Center report acknowledged the difficulty in determining the exact number of deaths during the dispersal, relying on the Forensic Medical Authority for its numbers.  As of 19 August, 1,068 bodies had arrived at the state-run Dar Zenhom mosque to be autopsied.  Compiled independent sources have put the death toll at 1,666. Tarek Zaghoul deputy head of Egyptian Organization for Human Rights (EOHR), an Egyptian non-governmental organisation in cooperation with the UN, agreed with the Ibn Khaldun report. “The EOHR sent observers to monitor the sit-in dispersal, and the police adhered to international standards.  They first surrounded the sit-ins, and then used microphones to call on protesters to leave.  Police then used tear gas, but no firearms. “Our monitors observed torture and the capture of policemen at the sit-ins,” said Zaghoul.  “It was clear they had weapons during the dispersal.” Zaghoul said the number of protester deaths at the sit-in did not exceed 200 people. “We expected more losses,” said Zaghoul.  “For those who say there were more than 800 deaths, we call on them to present their forensic reports.” The Ibn Khaldun Center for Development Studies was founded in Cairo in 1985 by Saad Eddin Ibrahim, a former sociology professor at The American University in Cairo and a founding member of former presidential candidate Ahmed Shafiq’s Egyptian Patriotic Movement political party. Additional reporting by Rana Muhammad Taha