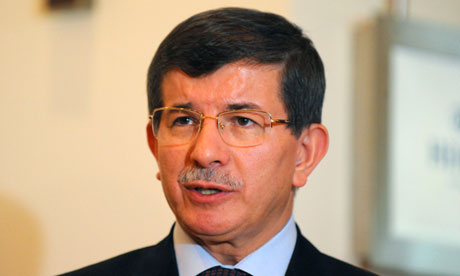 The foreign ministers of Turkey and Qatar held a joint press conference on Saturday where they urged Egypt to “return to the path of legitimacy and democracy.”

The two countries, which have taken firm positions against the military-backed ouster of former president Mohamed Morsi, called on Egypt to placate all parties in the ongoing political crisis to avoid further conflict.

“The stances of Turkey and Qatar on the situation in Egypt are the same,” Turkish Foreign Minister Ahmet Davutoğlu said. “We are not against any Egypt, we do not want to see any Egyptian killed … and we have always been with the Egyptian people.”

He said the two countries urge Egyptian authorities to release political detainees, including former president Morsi, who has been detained incommunicado since his ouster on 3 July.

Davutoğlu and his Qatari counterpart Khalid bin Mohammad Al-Attiyah acknowledged that their current stances on Egypt have won them a wave of criticism from Egypt and the Arab region. However, the two foreign ministers insisted, “History will prove us right, we are standing by our principles.”

Al-Attiyah said that Qatar had advised the Egyptian government against the use of force in the dispersal of the two pro-Morsi sit-ins in Rabaa Al-Adaweya and Al Nahda Square, adding, “Any conflict in Egypt harms the Arab world.”

In the past week, Davutoğlu and Al-Attiyah have been touring Europe to discuss the situation in Egypt and Syria with their European counterparts.

Following his meeting with Westerwelle, Davutoğlu said, “Inconsistent messages of the international community have paved the way for the massacre of hundreds in Egypt,” according to the Turkish ministry.