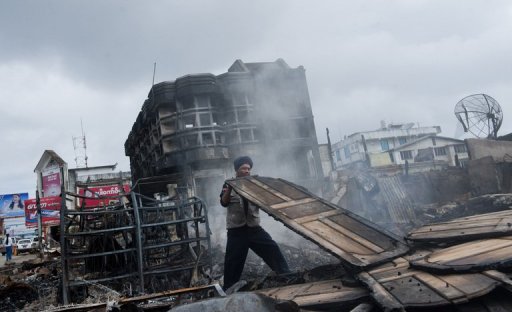 AFP – About 1,000 anti-Muslim rioters burned shops and homes in a fresh outbreak of communal unrest in Myanmar, officials said Sunday, as the former army-ruled nation grapples with spreading religious violence.

Police fired warning shots on three occasions as a mob tried to set property ablaze and attacked fire engines that were attempting to put out fires in a village at Kanbalu, in the central region of Sagaing, according to a statement on the Ministry of Information website.

“The local security forces stepped in to stop a group of approximately 1,000 people as they tried to torch a house. But the crowd kept shooting with slingshots and the situation became uncontrollable,” the statement said.

The unrest erupted after a Muslim man was arrested on suspicion of attempting to rape a Buddhist woman on Saturday evening, it said.

A crowd of about 150 people and three Buddhist monks gathered at the police station demanding that the accused be handed over to them.

When the authorities refused, the mob attacked Muslim property in the area and the crowd grew in size and ferocity as the night went on.

Attacks against Muslims — who make up at least four percent of the population — have exposed deep rifts in Buddhist-majority Myanmar, casting a shadow over widely praised political reforms since military rule ended in 2011.

The latest violence is the first anti-Muslim incident reported in Sagaing amid signs that the unrest is continuing to widen.

It began in the far west of Myanmar last year and has erupted in areas across the country since bloody riots in the central town of Meiktila killed dozens in March.

Last week watchdog Physicians for Human Rights said Myanmar risked “catastrophic” levels of conflict with “potential crimes against humanity and/or genocide” if authorities failed to stem anti-Muslim hate speech and a culture of impunity around the clashes.

Rights groups have accused authorities of being unable or unwilling to contain the unrest, which has left about 250 people dead and more than 140,000 homeless. Myanmar has rejected the claims.

Many of the incidents have featured retaliatory violence against Muslim communities in response to accusations of seemingly isolated criminal acts.

A regional police official, who asked not to be named, said the latest conflict broke out after the Muslim suspect allegedly approached a 25-year-old woman, “grabbed her hand and attempted to rape her”.

No injuries have been reported in the violence, but the ministry statement said at least 20 homes were destroyed as well as over a dozen shops and a local rice mill.

Ten fire engines battled the blazes and the ministry said security had been stepped up since early Sunday “to restore peace there”.

Radical Buddhist monk Wirathu, who has been accused of stoking the unrest with anti-Muslim and nationalist speeches, posted a message about the incident on his Facebook page.

Using the term “kalar” — a highly derogatory word — he blamed Muslims in general for the unrest.

“Kalars are troublemakers. When a kalar is there, the problem will be there. If every time a kalar made trouble and people responded with violence, both Buddhists and Buddhism will be harmed,” he said.

Two outbreaks of conflict in the western state of Rakhine in June and October last year left about 200 people dead, mainly Rohingya Muslims who are seen by many in Myanmar as illegal immigrants from Bangladesh.

In March sectarian strife in Meiktila killed at least 44 people — although many observers fear the toll was much higher — and thousands of homes were set ablaze.

The UN’s rights envoy on Myanmar, Tomas Ojea Quintana, last week slammed the government for allowing an angry crowd to surround his car and beat on the windows during a visit to Meiktila.

He said the incident gave him an “insight into the fear residents would have felt when being chased down by violent mobs”. Myanmar has said the envoy was not in danger.