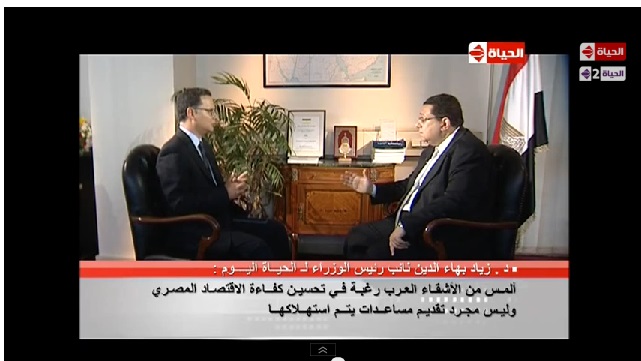 There will be no return to a police state, said Prime Ministerial Deputies for Economic Affairs and Transitional Justice, respectively Ziad Bahaa El-Din and Hossam Eissam, in separate interviews given on Saturday.

In an interview with El Hayat El Yom (Life Today) talk show on Al-Hayat channel, Bahaa El-Din said he will resign from his position if he finds “a situation he cannot tolerate” or if he is not able to present anything useful.

Bahaa El-Din added that his initiative for democratic transition started with a talk between himself and Prime Minister Hazem El-Beblawi, stating that the correlation of his name with the initiative was a temporary condition, now that the government had adopted it under the name of Protecting the Democratic Path. He added that the initiative can be taken as assurance that no political front will be excluded if it is committed to renouncing violence.

The deputy prime minister for economic affairs refused the description of 30 June as a military coup, calling it instead “a true expression from the Egyptian people” saying that the current government’s legitimacy stems from its quest for democratic transition. He also added that the talks about the return of Hosni Mubarak’s regime amid his release are “exaggerated”.

In a separate interview with El Soora El Kamela (The Whole Picture) show on ONTV channel, meanwhile, Deputy Prime Minister for Transitional Justice Hossam Eissa said that “reconciliation” is not a popular word in society at the moment, claiming that the Muslim Brotherhood had striven to “burn the state down.” This, Eissa said, is why their leaders were arrested.

Eissa added that the Brotherhood did not show any willingness for dialogue. “They only asked for [former president Mohamed] Morsi’s return, which is funny and insulting to the millions of Egyptians who filled the streets on 30 June,” he said.

Eissa said the people’s love for the army would not reestablish a “military or police state”, noting that this could have happened on 30 June, but the army neglected the option.

Eissa added that the dispersal of the Rabaa Al-Adaweya and Al-Nahda sit-ins would not have been possible without interim president Adly Mansour and his former vice-president Mohamed ElBaradei’s involvement, saying that it was “natural” that it be achieved by force when confronting an “armed sit-in”. He also rejected the “defamation” campaigns held against ElBaradei, but said that his decision to resign was “not correct.”